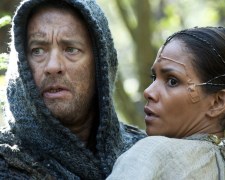 Cloud Atlas is a monumental piece of cinema that will take time to digest. It doesn’t feel appropriate to be reviewing it after just a single viewing but alas, that’s the position in which I now find myself. There was just the one preview screening in Brisbane and I must put a few thoughts into words before its official release on Thursday.

With a running time of 172 minutes, making it the longest mainstream movie of 2012, Cloud Atlas tells six stories concurrently. The first is set in the year 1849. The last is set at an undefined time well into the future. There are 13 featured actors and combined, they play 61 different characters. Five of the actors appear in all six stories – Tom Hanks, Halle Berry, Jim Broadbent, Hugo Weaving and Hugh Grant.

I can understand why some members within the Academy didn’t latch onto the film as a whole but why the specialist branches didn’t honour it for its production design and make-up will forever remain a mystery. It didn’t receive a single Oscar nomination. The filmmakers have done an immaculate job creating these distinctive worlds and have used every tool possible, including visual effects, to make the actors in each story look different.

The three people responsible for Cloud Atlas all get to share a director credit – Tom Tywker, who created the memorable Run Lola Run, and Andy and Lana Wachowski, the duo who crafted the ridiculously successful Matrix trilogy. All of the major studios brushed them off but they were still able to find the $102m budget necessary to bring David Mitchell’s 2004 novel to the big screen. This makes it one of the most expensive independent films of all time.

So what is the movie all about? If you want a simple three-word answer, you only need to look at the tagline on the poster – “everything is connected”. Every decision we make today is the result of other decisions that have been made in the past. On the flip side, every decision we make today will affect the decisions of those in the future. This isn’t a ground-breaking revelation but it does provide a timely reminder that the world is smaller than we realise and all of us have an important part to play.

In isolation, you could argue that each of these stories isn’t all that interesting. The comedic, modern-day plot involving Jim Broadbent in an aged care home is silly to the point of being distracting. Yet somehow, editor Alexander Berner has interwoven these narratives and by cutting back-and-forth between them at a rapid pace, created something that will hold your attention for three hours.

Cloud Atlas has battled at the international box-office since it premiered at the Toronto Film Festival last September. It’d be nice to see such a bold, risky project succeed but it was always going to divide audiences. Time Magazine named it as the worst film of 2012. Acclaimed critic Roger Ebert gave it 4 stars. I’m just glad it’s getting a release here in Australia (which wasn’t always guaranteed).

Well, that’s all I’ve got… at least until I see it a second time.