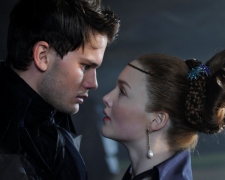 There’s been no shortage of artists who have tried to recreate Charles Dickens’ famed novel in a visual form. Great Expectations was first adapted in 1917, as a silent film, and has since been seen as a feature film, a television miniseries, a television movie, a stage play and a West End musical. There was even an animated version created in Australia back in 1983.

I’m not quite sure it’s deserved so many adaptations… but it’s clear that many have been drawn to this wonderful story set in the early-to-mid part of the 19th Century. When we first meet Pip, he is a young orphan who is living with his nasty, vindictive older sister (Hawkins) and her husband (Felmyng), who earns a meagre wage as a blacksmith.

Visiting his parents’ graves at the nearby cemetery, Pip is confronted by a filthy convict (Fiennes) who recently escaped from prison. He has been hiding from the authorities in the marshland and he begs Pip for food and something to help him remove the thick shackles around his ankles. Unsure what to do at first, Pip eventually helps the convict by stealing food and a metal file from his sister.

Not long after this encounter, Pip is invited to spacious home of the wealthy Miss Havisham (Bonham Carter). He believes that Miss Havisham is looking for a nice, smart boy to play with her adopted daughter, Estella. That’s not the case. The mysterious, oddly dressed Miss Havisham has motives that are far more sinister. She loves to toy with people’s emotions. There’s a great scene where she meets Pip for the first time and instils fear by bringing him in close and asking if he’s “afraid of a woman who has never seen the sun since you were born?”

We then slip a decade or so into the future and discover that Pip (Irvine) has grown up and now works as an apprentice blacksmith. It’s not a life he’s happy with though as there are two things he still desires. Firstly, he wants to become a “gentleman”. Secondly, he wants to win the heart of Estella, who he has always loved since they first met as children.

They may sound like foolish dreams but an unexpected visit from a lawyer (Coltrane) will change Pip’s life forever. It turns out that Pip has been granted a huge sum of money by an anonymous benefactor. He can now give up his job as a lowly blacksmith, move to London and start mingling with the upper echelon of society.

Many of today’s movies feel “dumbed down” so as not to overexert filmgoers. Storylines are kept simple. Characters are either good or bad. Every emotion is clearly illustrated. That’s not the case with Great Expectations. My plot overview is only scratching the surface of what is a richly detailed premise. The characters are flawed, misguided but you’ll still feel sympathetic given their dark history.

It’s almost impossible to condense a classic novel into a two-hour film but writer David Nicholls (One Day) and director Mike Newell (Four Weddings & A Funeral, Donnie Brasco) are to be commended for their efforts. I enjoyed the gloomy English setting and was impressed by how many subplots they were able to explore. The only character that feels underdone is the older version of Estella, played by Holliday Grainger. It made it harder to understand why Pip had fallen so madly in love and had such an obsessive desire to be with her.

The “stand out” amongst the cast is Olly Alexander (Bright Star, Gulliver’s Travels) who plays Herbert Pocket, a London-based friend of Pip. The story gets a little heavy at times and Alexander’s excitable, outgoing personality sweeps through like a breath of fresh air. Helena Bonham Carter, looking like she’s come straight from a Tim Burton film, and Ralph Fiennes also have a strong on-screen presence.

Great Expectations should impress those who enjoy an intricate period-piece drama.