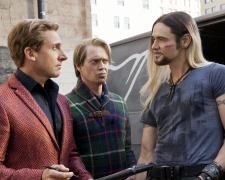 For decades, Burt Wonderstone (Carell) and Anton Marvelton (Buscemi) dazzled audiences with an elaborate magic show in Las Vegas. You’ll note that I’m speaking in past tense. They are dazzling no longer. As they stand on stage and look out into the auditorium, they can see a few people and lot of empty seats.

The hotel’s manager, Doug Munny (Gandolfini), delivers an ultimatum – they either come up with a new act to lure customers or they can start looking for another job. They give it a try with a fresh outdoor stunt… but Burt’s selfish, egotistical behaviour sees it fail in spectacular fashion. It’s the last straw for Anton who tells Burt that they’re finished – both as work colleagues and as friends.

With their show now officially canned, Burt doesn’t know what to do next. He’s used to being the star. He’s used to having his name in neon lights. He’s used to living in a hotel with 24 hour room service. Now, he’s out of a job and thanks to some bad investments, he has only $200 to his name.

It’s a harsh reality check but three people will help get Burt back on his feet. As his long-time assistant, Jane (Wilde) offers support. She wants to see Burt return to the big stage with a view to getting a bigger role herself. As his long-time idol, Rance Holloway (Arkin) offers inspiration. The two meet by chance with Rance providing some wise words that allow Burt to rediscover his passion.

And then there’s Steve Gray (Carrey). He’s offering motivation… but not intentionally. Steve is the new magician in town and has already established a popular cable television program so that he can show off his talent. Burt has no intention of being upstaged. He wants to beat Steve Gray at his own game.

The Incredible Burt Wonderstone is the kind of film that creates laughs by having characters who look funny and speak funny. I only wish the dialogue itself was funny. The jokes are obvious and drawn out but I’ll confess there were a few moments that left me smiling. The best is saved for last – we get to see what goes on “behind the scenes” of a very cool trick.

Fans of Steve Carell should enjoy his exaggerated performance with Jim Carrey and James Gandolfini also deserving a mention. Don’t get too excited though. It is nice seeing them on screen again (particularly Carrey) but this so-so script, credited to four different writers, doesn’t given them a lot to work with. They’re capable of so much more.