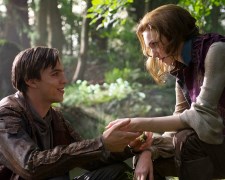 It was just a few weeks ago that we were “treated” to Hansel & Gretel: Witch Hunters – an attempt to take a simple children’s fairy tale and transform it into a 90-minute action movie. Hopefully you didn’t get a chance to see it. The film was awful.

Thankfully, Hollywood has redeemed itself with much more interesting fairy tale adaptation. Calling the film Jack & The Beanstalk would probably turn away older audiences and so the producers have come up with the more “manly” title – Jack The Giant Slayer.

We follow two characters concurrently during the opening scenes – Jack (Hoult) lives with his poor uncle in a rundown shack in the countryside. The roof is leaking badly and so Jack has been sent to the castle to try to sell his trusty horse for a few gold coins. There, he meets a monk who is desperate for a horse but only has a handful of beans he can provide in exchange.

At the other end of the social ladder is Isabelle (Tomlinson), a princess in line for the throne and who is closely watched by her over-protective father (McShane). She’s tired of being cooped up inside the castle walls and is not happy that she’s being forced to marry one of the King’s closest advisors, Roderick (Tucci). Isabelle flees the castle and goes in her search of her own life, her own adventure. It leads her to Jack’s front door.

Cue the action. One of the magic beans slips through the floorboards and sprouts into a ridiculously large beanstalk that shoots like a rocket into the sky. Jack manages to avoid the carnage but the house, with Isabelle still inside, is now amongst the clouds at the top of the beanstalk.

Under the instruction of the King, a team of soldiers led by the loyal Elmont (McGregor) goes in search of Princess Isabelle. Jack also volunteers his services, despite being afraid of heights. When they finally make it to the top of the intricate beanstalk, they discover a world that was thought to be legend. It is home to a nasty group of giants who have a fetish for the taste of human flesh.

The dialogue is cheesy but there’s still plenty of fun to be had with Jack The Giant Slayer. For starters, there are a few twists in this tale. Not all the characters make it to the end and some meet their demise much earlier than expected. The visual effects are also top notch. It has given director Bryan Singer (The Usual Suspects, X-Men) the ability to create giants that are scary, menacing and imposing. You’ll be wondering how the humans can escape their enormous grasp.

It’s not a bad cast either. A decade ago, Nicholas Hoult was an unknown kid cast alongside Hugh Grant in About A Boy. Now, he’s the lead actor in a $195m Hollywood blockbuster. Stanley Tucci (The Lovely Bones) entertains as a villain and Ewan McGregor, complete with his delightful English accent, fits nicely into a hero-type role.

Best suited for family audiences and not afraid to throw in a splash of violence, Jack The Giant Slayer is a likeable, easy-to-watch adventure.