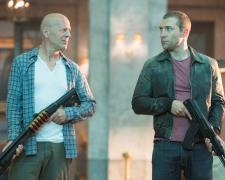 Someone needs to offer a university degree in how to be a successful super villain. On the big screen, we see their plans foiled again and again. It’s not hard to see why either. They keep using the same ideas and they keep falling for the same tricks. At the very least, these villains should be watching Austin Powers on a regular basis.

In A Good Day To Die Hard, we head to Russia and are introduced to a guy named Yuri Komarov (Koch) who is about to give evidence in a high profile case. There’s massive corruption within the Russian government and Yuri knows the location of a top secret file that will expose the truth. As you’d expect, there are many that don’t want that file to see the light of day. Heading the list is Viktor Chagarin (Kolesnikov), a dodgy government official looking to protect his own interests.

The court house will soon resemble a war zone. A group of heavily armed men blow out the side of the building and try to grab Yuri Komarov before he is able to testify. It turns out they’re working for Viktor Chagarin and they have just two tasks – (1) get Yuri to reveal the location of the file, and then (2) kill him.

Thankfully, two Americans will save the day. We’re all familiar with John McClane (Willis), the cannot-be-killed hero from the last four Die Hard movies. This time though, he’s reluctantly teaming up with his son, Jack (Courtney), who has been working for CIA for a number of years. They rescue Yuri, after a lengthy car chase, and plan of getting him out of the country. They just need to track down the file first.

They shoot their machine guns, they leap off buildings and they blow stuff up. If you’re going to see this film purely for its action scenes, you’re likely to be satisfied. They dominate the 97 minute running time.

For me though, it’s not good enough. The plot is weak. At one point, we end up in Chernobyl and discover a huge stockpile of weapons-grade uranium which is going to be used by the bad guys. It’s so unoriginal. The film also lacks the comedy and the suspense that I remember so fondly from the first Die Hard movie. If you watch these films back-to-back, the deficiencies become even more obvious. Just start by comparing the villains. Could the bad guys in A Good Day To Die Hard be any less interesting?

Bruce Willis looked pretty tired by the end of the film. I know how he felt.