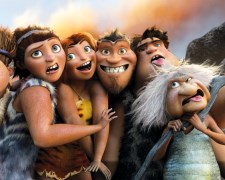 Some filmmakers like to transport us back in time. Already this year, we’ve revisited the 19th Century to follow a determined U.S. President in Lincoln, a vengeful bounty hunter in Django Unchained and a forsaken socialite in Anna Karenina.

It’s time to go a little further back in time. The talented DreamWorks Animation crew are taking us back to a prehistoric era and introducing us to one of this planet’s first human families – the Croods. Much has changed over the past 4 million years… but it seems family dynamics are still very much the same.

Grug (Cage) and his wife Ugga (Keener) are doing the best they can to raise their three children. Eep (Stone) is the eldest - an adventurous girl who wants to go out and explore the world, despite the wishes of her overprotective father. Thunk (Duke) is the middle child – a not-so-bright boy who appears to have been dropped on his head a few too many times. Sandy (Thom) is the youngest – an incoherent girl who seems to have the characteristics of a rabid dog.

They’re an odd assortment of characters and they live in a very scary world. I’m not quite sure why but they seem much smaller compared to the creatures around them. There’s a particularly nasty lizard that is chasing them for his next meal. For this, and several other reasons, the Croods spend much of their time hiding in a darkened cave, guarded by a heavy boulder. Grug doesn’t want them to meet the same fate of other families who once resided in the area.

Their safe, solitary existence is about to come to an abrupt halt. In a similar plot development to last year’s Ice Age 4: Continental Drift, these characters are forced to abandon their home when the world’s tectonic plates start to shift. There are earthquakes, lava and blackened skylines. They will be guided to safety by a “caveboy” known simply as Guy (Reynolds). Having recently lost his own family, he too is looking for a new place to call home.

Kirk De Micco and Chris Sanders are credited as the film’s writer-directors but they had help from veteran actor John Cleese who contributed to the first few drafts of the script. It’s certainly nothing new. The story covers a bunch of family-friendly themes that have become entrenched within the animated feature genre. The feisty, red-headed girl, looking to explore the world against the wishes of her domineering father, reminded me of last year’s Academy Award winner, Brave.

That’s not to say The Croods isn’t an enjoyable movie. There are some fun, Flintstones-like gags that make reference to the era’s primitive technology (such as the way they take photos). The animation is very good, exemplified by a fast-moving running sequence during the film’s early stages. The voices have also been well chosen and you’re likely to enjoy the entertaining squabbles between Nicolas Cage, Emma Stone and Ryan Reynolds. It’s their three characters, nicely named I might add, that dominate throughout.

Four family movies are being released in Brisbane cinemas over the Easter period and they’ll all be scrambling for a share of the lucrative box-office. I wouldn’t describe it as “memorable” but The Croods still looks like the pick of the bunch.