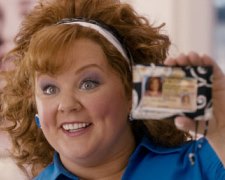 Sandy Patterson (Bateman) sits down at his home computer and proudly proclaims to his wife (Peet) that he’s balanced the household budget. All the bills have been paid for the month and there’s $14 left over. It’s a nerdish comment but that’s the kind of guy Sandy is. He’s a content accountant who works for an investment company and pulls in about $50,000 a year. He’d like to make more but it’s a tough economic environment.

Sandy’s safe, monotonous life is about to be upturned in an unexpected fashion. His identity is stolen by a woman (McCarthy) living on the other side of the country. She creates a fake credit card in his name and racks up a huge credit card bill. She also gets involved with a crime syndicate and ends up being arrested for punching a police officer. After skipping bail, the cops turn up at the real Sandy’s doorstep with an arrest warrant. Suffice to say he doesn’t know what the hell is going on.

It couldn’t come at a worse time for Sandy. A new job opportunity has arisen with a huge pay increase… but his potential employer is concerned as a result of these recent events. The cops don’t seem to be doing much and so it’s up to Sandy to track down this mysterious woman and clear his name. The plan is to travel to Florida, drag her back to Denver and present her to the police.

Finding her proves to be the easy part. Taking her into custody will be much more difficult. This is a woman who is an expert in deception and manipulation. Complicating the situation is the fact that others are looking to get their hands on her – two goons working for a disgruntled mobster in jail, and a bounty hunter hoping to collect $50,000. It all adds up to a wild adventure across the country.

This film has been savaged by many critics in the United States but I honestly think it’s not too bad. Jason Bateman does what he does best – playing the “straight” guy who tries to act normal when everyone around him is insane. Melissa McCarthy has fun in her role. It’s as if she’s been tasked with creating the most annoying person alive… and she does a pretty good job.

There are some humorous scenes and a few surprising plot developments along the way. Further, there’s a darker undercurrent to the story which first reveals itself in a scene involving the female Sandy in a car outside a motel room. There’s also some risky, politically incorrect material that makes reference to McCarthy and her character’s overweight figure.

While it held my attention for the most part, writers Craig Mazin and Jerry Eeten have struggled to come up with a decent ending. There’s a moment when the two Sandys sit down to have dinner in a nice restaurant and it all slides downhill from there. The film’s darker elements are brushed aside and we’re left with a zany, feel-good finale.