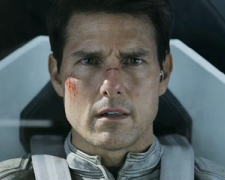 Some will want to see this because they’re a fan the science fiction genre. Others will want to see it because they’re part of a shrinking collective who like Tom Cruise. I don’t fall into either of those categories, however. Oblivion excited me as it marked the follow up feature from director Joseph Kosinski. This is the guy who brought us Tron: Legacy in 2010 – a film that created a cool, futuristic world and filled it with striking visuals, booming sound effects and a memorable music score.

It would appear those features are part of Kosinski’s signature, at least for the moment. I can use the same descriptors when talking about Oblivion. The story is set in the year 2073 where the Earth has been all but destroyed after a war with an alien race. The aliens were defeated but the planet is now uninhabitable due to the effects of nuclear weapons. A tiny portion of the population survived and they’ve been transported to Titan, Saturn’s largest moon, to try to forge a new existence.

This isn’t like apocalyptic films such as Deep Impact, Armageddon or The Day After Tomorrow. Those films are more about emotion. We follow a bunch of characters and we hope that they’re going to make it to the end of the movie and wrap their arms around their loved ones. Oh, and it’d be also nice if the Earth still exists.

There is a small, not-so-convincing emotional element to Oblivion but this is a film to be enjoyed more for its mystery and intrigue. As it begins, we discover that Tom Cruise plays Jack – a mechanic who is one of Earth’s last remaining residents. He and his partner (Riseborough) live in a space-ship like house that can be found high above the clouds.

They’ve been tasked with the responsibility of protecting a number of large machines which are extracting water from the Earth’s oceans and converting it into energy. It’s taken many years but their work is almost done. In two weeks, they’ll join the other human survivors on Titan and the energy will be used for the benefit of the new colony.

Things aren’t that simple, however. There’s a sudden flurry of activity on the Earth’s surface that Jack is struggling to explain. Why are the machines being attacked? Did a few aliens manage so survive? Jack has also been having strange dreams. He sees himself standing atop the Empire State Building in the company of a young woman (Kurylenko). What do they signify?

It might take you a little while to get your head around the ending (there was some confusion at my preview screening) but Oblivion will hold your attention for the full two hours. It kept me guessing and for that, I am grateful.