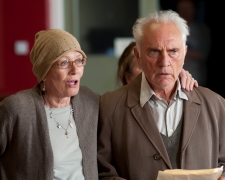 You’re never too old to step out of your comfort zone and try something a little different. That’s the warm-hearted message contained in Song For Marion, the closing night film from the 2012 Toronto Film Festival.

When we first meet Arthur (Stamp) and Marion (Redgrave), we see that they’re a long-time married couple now entering their twilight years. Marion is a relaxed, easy-going and adventurous. She recently joined a choir group that performs at a local community hall. They go by the name of the OAPz – that’s Old Age Pensioners with a “z” – and a led by a young lady (Arterton) who enjoys helping out.

You won’t see Arthur in the choir though. He comes across as a tired, cranky old man who seems to take great pleasure in complaining and being miserable. He can’t understand why his wife enjoys singing with a group of strangers. When asked if he too wants to participate, his response comes as no surprise – “you know how I feel about enjoying things”.

Arthur’s narrow-minded view of the world will be shaken when Marion is diagnosed with terminal cancer. She has only a few months left to live. Arthur demands that she give up on the choir and not jeopardise her deteriorating health. Marion has no such plans. She wants to go out in style and perform one last time with her friends in a prestigious choir competition. Realising that her mind cannot be changed, a reluctant Arthur agrees to help out.

This is a film full of clichés – a fact that writer-director Paul Andrew Williams will freely admit. Drawing from experiences with his own grandparents, Williams never wanted to make a genre-changing Oscar winner. His intent was to create a comforting, easy-to-watch movie that will put a smile on your face. This is evidenced by the song selections of the OAPz which include “Let’s Talk About Sex” and “Love Shack”.

The film’s comedic elements are a bit clunky but Song For Marion clicks into gear when it starts pulling at the heart strings. There’s a beautiful scene in which Vanessa Redgrave sings the song “True Colours” that will leave some reaching for tissues. The nice performances from veterans Terence Stamp and Vanessa Redgrave also deserve a mention.

Most cinemas will be swamped with Iron Man 3 fans this weekend but Song For Marion is there to offer a worthy alternative.

You can read my chat with writer-director Paul Andrew Williams by clicking here.