Review: The Place Beyond The Pines 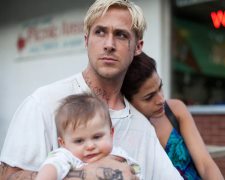 In the very first shot of the film, we see a shirtless, tattooed Ryan Gosling (fans will be pleased). His character is Luke and he’s working for minimum wage as a motorcycle stunt driver in a travelling carnival show. Put simply, his life is going nowhere. He has no family, no career aspirations and next-to-no money.

That changes when he tracks down an old love interest, Romina (Mendes), and learns that he’s the father to an infant child. Some in this situation might start running for the hills but Luke is thrilled with this sudden development. He immediately quits his job, finds work with a local mechanic (Mendelsohn) and promises to provide and care for his son. His life suddenly has a purpose. There’s a beautiful moment where he tells Romina that he wants to let his son taste ice-cream for the first time.

Luke initially comes across as a good, well-meaning guy but some of his actions will soon leave you thinking otherwise. Romina has been dating another guy for quite a while and Luke feels threatened by the fact he’s providing for Romina and his son. Determined to become the “alpha male” of the household, Luke turns to a life of crime. He starts robbing banks – using his skills as a motorcycle rider to flee the scene and avoid the authorities.

What happens next came as a complete surprise to me. I’m not going to spoil it. I watched an interview with director Derek Cianfrance (Blue Valentine) where he remarked that he wanted to keep this film as quiet as possible prior to its premiere at last year’s Toronto Film Festival. Most filmmakers go in search of publicity… but Cianfrance did the opposite. His reason was simple – to preserve this film’s intriguing twists and to watch the stunned reactions of those in the audience.

I’m going to abide my Cianfrance’s wishes and say no more regarding the storyline. Hopefully I’ve tweaked your curiosity. Given I see more than 200 movie a year, I can’t help but applaud the small minority of films that are prepared to take chances and offer something different. The Place Beyond The Pines does just that.

It’s been three days since I saw the film and I’m still struggling to grasp the broad message. The film has something to say about heroes and villains and the blurry line in between. It also has something to say about the connection between fathers and sons. Don’t ask me for any more details though. It’s not that I don’t want to spoil… it’s just that I’m still figuring it all out.

It’s the interesting characters and their thought-provoking choices that make this film so compelling. I’m expecting cinemagoers to walk away with polarising viewpoints and it’s exciting to see a movie offering such a challenge. What do you make of these people? How would you have acted in their situation? It’s anything but black and white.

Not everything fits in the third act (a few too many coincidences) but The Place Beyond The Pines is a quality drama that I’m keen to see again.