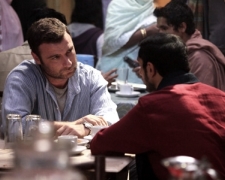 Two men are sitting in a café in Lahore, Pakistan. They are discussing the recent kidnapping of an American lecturer who had taught for many years at the local university. This isn’t an idle, run-of-the-mill conversation. One of the men is Bobby (Schreiber) – an American journalist fishing for information on the crime. The other is Changez (Ahmed) – a young, highly respected Pakistani lecturer who Bobby believes is linked to the kidnappers.

This current day storyline plays second fiddle to what this film is really about. Told by way of flashback, The Reluctant Fundamentalist focuses on Changez’s life until this point. He moved from Pakistan to the United States to attend college and on graduating, landed a lucrative job at a prestigious consulting firm in New York City. Changez’s astute ability to value companies and identify cost savings immediately caught the attention of his boss (Sutherland) and he was on track to become the youngest partner in the firm’s history.

That never eventuated. We know this because Changez is now working as a lowly paid lecturer in Lahore. So what happened? How did his life take such a shift? Why is one of the world’s most gifted consultants now being spoken of in the same sentence as a renowned terrorist? Director Mira Nair (Monsoon Wedding, The Namesake) slowly peels back the details of Changez’s life and provides answers to the curious audience.

Without giving too much away, The Reluctant Fundamentalist has some obvious points to make about Changez’s life in the United States and the unnecessary barriers he had to face. We live in a world where people often act in an ignorant, ill-informed manner. It’s hard to win an argument with a person who chooses to go with their gut instinct as opposed to readily obtainable facts.

Unfortunately, the film spends a little too much reinforcing this message. By the time we get back to the two men sitting in the café, there’s only 15 or so minutes left to follow the more interesting story – that of the kidnapped lecturer and what can be done by both of these men to save him.

If there’s a one reason you should see this film, it’s the lead performance from Riz Ahmed. Some might remember him from the great British black comedy Four Lions where he played a not-so-wise suicide bomber. The Reluctant Fundamentalist allows him to show his talent as a dramatic actor and he makes the most of the opportunity through this complex character. It’s hard to work out if his smart, good-natured personality hides something much darker underneath.

There are several great conversations in the film and the back-and-forth between Riz Ahmed and Liev Schreiber in the café springs to mind. On the flip side, there’s some strange stuff between Ahmed and his co-workers at the consulting firm that feels fake, scripted. It highlights the up-and-down nature of the film – some parts are compelling while other parts are unconvincing.