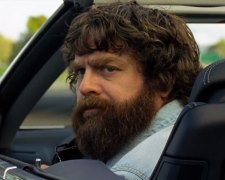 Released back in 2009, The Hangover was an amusing, surprising, innovative comedy.  It earned huge points for its shock value – as if daring itself to become crazier and crazier with each passing scene.  While there were a few decent laughs in the 2011 sequel, most would rank it below the original.  It stuck too closely to the first film and didn’t seem to want to take any chances.

If you shared a similar point of view, you’re likely to take some pleasure from this final instalment, The Hangover: Part III.  For starters, there’s no hangover!  In the earlier films, the four guys who make up the “Wolfpack” woke up from a huge bender and tried to piece together the events of the previous evening.

This time around, they’ve been kidnapped by Marshall, an aggravated drug dealer (Goodman) who is looking for $21 million in gold bars that was stolen from him.  Marshall knows they’re not behind the heist… but they can lead him to the person responsible – Mr. Chow (Jeong).  The former police officer recently escaped from a Thai prison and is now rumoured to be hiding in the United States.

Marshall takes Doug (Bartha) as collateral and puts Phil (Cooper), Stu (Helms) and Alan (Galifianakis) in a “no choice” scenario.  They have to track down Mr. Chow and find the $21 million in gold.  If they can’t deliver, it’ll be the last time they see Doug alive.  It sets the stage for another wild adventure spread across several locations.

The Hangover: Part III provides a fitting end to this saga.  It's still dominated by these memorable characters (cheers) and it's not the same as the second film (cheers again).  Zach Galifianakis again steals the show as the 42-year-old Alan – a guy with no girlfriend who still lives with his parents. He’s socially awkward and mentally unstable.  He can’t complete a sentence without saying something inappropriate.  Despite all of this, there’s something sweet, endearing about the guy.  Watching him in action, I can’t help but think of the line – "I dare not look, yet I cannot turn away."

Bradley Cooper and Ed Helms also deserve their fair share of kudos.  They both do a terrific job as the “level-headed” friends trying to find a way out of this insane situation.  Not only do they have to locate Chow and the gold, they have to work equally hard in keeping Alan under control.

You could make a strong argument that The Hangover: Part III contains more of a plot than the earlier movies.  There are fewer surprises, fewer laugh-out-loud moments and fewer tigers in bathrooms.  Instead, this is a film that engages thanks to its carefully thought-out storyline (which does still come with a few twists).  How will these guys find Chow and then convince him to hand over the gold?

With a few nice references to characters from the earlier movies, it’s clear that The Hangover: Part III will be the last in this successful franchise from writer-director Todd Phillips.  It won’t be winning any Oscars but that won’t bother the millions around the world who will have fun checking it out this weekend.