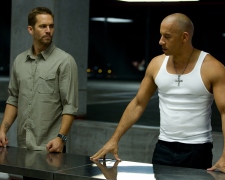 Now in its sixth instalment, The Fast & Furious series continues to amaze. I’m not talking about the content of the movies… but rather the faith shown by fans over the past 12 years. When it opened two weeks ago in the United States, Fast & Furious 6 took in $97.4m over its first three days. That’s the biggest opening in the franchise to date and it’s no surprise that a 7th film is already in production. Star Vin Diesel is hopeful that there’ll be a “trilogy of trilogies”. I’m sure his agent won’t mind either.

When The Fast & The Furious premiered back in 2001, the focus was cars, cars, cars. There’s only so far you can take such a concept and so we’ve seen the series take a graduate shift towards a more generic style of action film. I’m speaking of insane villains, over-the-top storylines and elaborate chase sequences.

At the beginning of Fast & Furious 6, we find our heroes have been travelling across the globe and enjoying their newfound wealth. It’s a nice life but Dom (Diesel), Brian (Walker) and Mia (Brewster) are quickly learning an age old truth – there are some things more important than money. They’d love to be able to return home and catch up with friends over a backyard barbeque but unfortunately, they’re still wanted criminals in the United States.

But wait! There has to be a happy ending, right? Diplomatic Security Service agent Luke Hobbs (Johnson) pays Dom an unexpected visit. Hobbs speaks about a rogue British Special Forces soldier named Owen Shaw (Evans) who plans on assembling a weapon of mass destruction and using it for villainous purposes. Don’t ask me much more as I’m unsure about the specifics of weapon and his motives.

Since the best of MI6 and the CIA aren’t up to the case (for reasons also never explained), it has fallen on the Fast & Furious gang to save the day. In return, they will be pardoned for their previous crimes and given clear passage to return to the United States. There’s still hope for that backyard barbeque!

I’ve generally been a fan of this series (well, except for the awful Tokyo Drift) but this new instalment is a letdown. It’s a forgettable premise with a forgettable bad guy. I saw this film a week ago and am struggling to remember much more than what I’ve detailed above. It’s nice to see the return of Letty (Rodriguez), thought to have been killed in the fourth film, but there’s not much in the way of new character development.

As for the action scenes, I think they go too far. I support excitement with a dash of realism. That doesn’t include jumping off a speeding car, flying 20m and then catching someone mid-air. That doesn’t include chasing a plane down an airport runaway that goes for roughly 80km. Further, did we really need such fast-paced editing? With so many characters, I often had trouble working out who was fighting and who had the upper hand.

It’s interesting that the scene which generated the most excitement from the audience was the sneak peak of Fast & Furious 7 that features at the start of the closing credits. It highlights the disappointment of what this film “could have been” but brings a sense of anticipation of how fun the next film could be.

You can read my interview with director Justin Lin by clicking here.