Review: A Lady In Paris 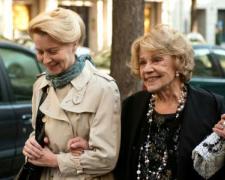 It takes some encouragement from her daughter but Anne (Magi) is ready for a fresh start. Her mother recently passed away, her kids have moved out of home and she’s been divorced for a decade. There’s nothing keeping her Estonia and so she’s decided to accept a position as a live-in carer in Paris. She studied French in college but this will be her first trip to France’s capital city.

Anne has been employed by a man named Stéphane (Pineau) to look after an elderly woman named Frida (Moreau). Their connection is not made clear at first but we learn that these two were once lovers. It was a short lived affair and the two have remained close friends ever since. Frida professes that, along with her late husband, he’s one of only two men that she’s ever cared about.

Stéphane doesn’t provide much in the way of instruction to Anne and she quickly discovers that this will not be an easy assignment. Frida is a wealthy lady with a beautiful Parisian apartment… but she’s also rude, stubborn and reclusive. On her first full day, Anne does what she is asked and prepares croissants and tea for breakfast. Frida isn’t happy though. She scoffs that the croissants taste like plastic and she tips the tea on the floor.

I’m sure there are many elderly folk that will never change. We don’t often see them in movies however. We prefer stories about those who have an epiphany. They suddenly appreciate the richness of life and the value of good company. I speak of films such as Driving Miss Daisy, Gran Torino and The Visitor.

In this case, a trust starts to develop between Frida and Anne. They come from very different backgrounds but deep inside, they’re both realise that they’re lonely people looking for someone who will listen. In the words of Humphrey Bogart – “this could be the start of a beautiful friendship.”

There’s not much more to it than that. With only three characters of note, this is a simple, agreeable, dialogue-driven tale. It’s not preachy and for the most part, it’s not filled with artificial drama. An icon of French cinema, 85-year-old Jeanne Moreau delivers a tender performance as the grouchy yet insecure Frida. She is well supported by Laine Mägi and it’s a nice touch to see her character walking the streets of Paris by night and exploring the city’s wonders for the first time.

There’s a subplot late in the film involving Frida’s past involvement with an Estonian choir that feels a little forced, messy. It detracts only slightly from what is a warm-hearted piece of French cinema.