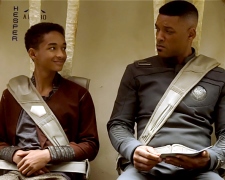 Some quick facts to bring you up to speed – (1) After Earth is set about 1,000 years into the future, (2) humans were forced to flee Earth and they now live on a planet called Nova Prime, and (3) their new planet is under attack from “fear sensing” creatures known as Ursas.

If this makes the film sound like an exciting science fiction adventure, think again. This is a family orientated film… and by that, I mean that it’s a family orientated vehicle for Will Smith. Some dads will get their kid a new bike. Other dads get their kid the leading role in a $130m action blockbuster. Given that Will Smith is the film’s co-writer and co-producer, I’m pretty confident only one actor auditioned – his 14-year-old son, Jaden.

Will Smith takes on the role of Cypher – a leading general within an important peacekeeping organisation. His strong leadership has helped save the planet from numerous alien attacks and he is highly regarded by his troops. Unfortunately, Cypher doesn’t seem to have the right work-life balance. He’s spent too much time saving the world and not enough time with his son, Kitai (the role gifted to Jaden Smith).

Cypher’s wife (Okonedo) comes up with a way of remedying the situation. Kitai can accompany his father on a routine mission into a space. That way, Cypher can still fulfil his duties while spending quality time with his son. What could go wrong?

As we soon find out, a LOT could go wrong. The spaceship encounters problems and is forced to make a crash landing on the planet Earth (how convenient). Most of the crew were killed and the only two survivors were Cypher and Kitai (also convenient). The only way they can be saved is if they can locate the ship’s rescue beacon that detached during the crash. They can’t do it together though. Cypher’s leg is broken and so it’s up to Kitai to travel 100km across Earth’s rugged terrain and activate the beacon. Oh, and I should also mention that there’s one of those “fear sensing” aliens on the loose.

So is Will Smith using this film to help push the acting career of his son? Um, yes… and it couldn’t be more obvious. Let it be noted that Will Smith is a HUGE box-office drawcard. Between 2002 and 2008, he starred in 8 consecutive movies that grossed more than $135m in the United States. Studios pay him big dollars, they put him in exciting leading roles and then they sit back and reap the profits.

That’s not the case here. It doesn’t happen often but we’re seeing Will Smith in a supporting role. On top of that, it’s as if every emotion has been erased from his memory. He speaks in a robotic, monotone voice and I’d strongly argue that it’s the most boring character he’s ever played. This is a deliberate decision though. He’s being a “good father” and giving all the flashy action scenes to Jaden.

The problem is that Jaden Smith struggles to carry this film. When you think about other action leads this year – Robert Downey Jr in Iron Man, Chris Pine in Star Trek, Vin Diesel in Fast & Furious 6 – you realise that he’s not up to the task. If you’re going to engage the audience, you need someone who is strong and charismatic. Jaden Smith is not that. His character comes across as immature, over-emotional and it’s hard to believe he can extract himself from so many perilous situations (always at the last minute too).

After Earth doesn’t offer much by way of story either. The theme is well-defined (yay for a father and son getting to know each other) but the execution is messy. As part of his journey, Kitai bumbles his way through an assortment of obstacles that resemble levels in a video game. There’s one scene where he’s trying to outrun a series of giant baboons. It’s clear these baboons are faster and are closing in… but every time we switch to a new camera angle, they’re suddenly further away. What could have been an exciting sequence is anything but.

Nominated for an Academy Award in 2000 for The Sixth Sense, director M. Night Shyamalan has struggled in recent years. After a string of failures (Lady In The Water, The Happening, The Last Airbender) it’s reached the point where his name is mud. That may sound harsh but how else can you explain why he isn’t mentioned in the two trailers for After Earth? There’s always the chance he’ll return to form with a great comeback feature but sadly, that day is not today.