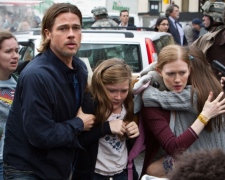 According to Wikipedia, there are at least 640 zombie movies. I’ve got a hunch that many of these went “straight to video” but still, it’s a subject matter that filmmakers are turning to again and again and again.

I wasn’t sure what to expect from World War Z but I was hooked within the first 20 minutes. After a quick getting-to-know-you sequence in the family kitchen, Gerry (Pitt) and his family get in their car and go for a drive through Philadelphia. As they reach the city centre, they find the traffic is backed up on every street, police motorcycles are flying past and helicopters are hovering above. What is going on?

It’s a great scene because we’re only seeing things from Gerry’s perspective. We know something is wrong… we just don’t know what it is yet. An explosion in the distance kick starts the pandemonium. Thousands of people are running through the streets and screaming loudly. For those in cars, it’s time to drive as if the road rules no longer apply.

It’s time for the big reveal. This isn’t a terrorist attack. We’re dealing with ZOMBIES! Once they get their teeth into you, it’s only a matter of seconds before you’re a new member of the growing zombie army. Gerry and his family manage to escape the mayhem but only thanks to his former employer – the United Nations. They orchestrate a daring helicopter rescue and fly the family to the safety of a U.S. navy ship stationed in the Atlantic Ocean.

It is there where Gerry realises the gravity of the situation. The President of the United States has been killed and the Vice President is missing. Zombie attacks are being reported across the globe and the computer models suggest that it’s only a matter of time before the planet is completely overrun.

Gerry also learns there was an ulterior motive behind his rescue. Given his expertise as a top-notch investigator, he has been asked to return to the mainland and locate the original source of the virus. He will accompanied by a doctor and a well-armed military team. It’s an extremely risky assignment but Gerry reluctantly agrees realising it’s the only way his wife and two children can be guaranteed lodging aboard the ship.

We’ve seen a bunch of action blockbusters so far this summer (Iron Man 3, Star Trek Into Darkness, Fast & The Furious 6) but this is the first time we’ve seen one offer suspense. This is not just because of the freaky looking zombies. It’s also because of the perilous situations crafted by the screenwriters (who have drawn from Max Brooks’ 2006 novel of the same name). With every major scene, you’ll be asking yourself – how the hell are they going to get out of this?

In the leading role, Brad Pitt is a good fit as the film’s strong yet reluctant hero. Ok, so it’s a bit of a stretch to think that he can pull off so many amazing escapes but still, it’s hard not to admire his character’s calm demeanour and the common-sense way in which he goes about the task at hand. Watching him unpick the mystery of the zombies is far more interesting than similar films which focus on “shooting anything that moves”. This is most evident during the finale.

Throw in a few unexpected plot developments and World War Z adds up to an engaging action-thriller. Do see it.