Review: This Is The End 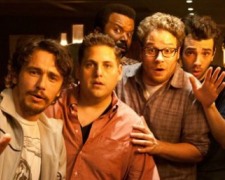 I don’t watch a lot of television but one show I’ve fallen in love with over the past decade is Curb Your Enthusiasm. It stars Larry David... as Larry David. We follow his crazy adventures as he tries to find something to do with his life after the success of the Seinfeld television series (that he co-created).

During the show, he interacts with a bunch of Hollywood stars playing themselves. There’s Richard Lewis, Ted Danson, Martin Scorsese, Ben Stiller, Meg Ryan, Ricky Gervais and Michael J. Fox – just a small sample of the many cameos.

A big part of the show’s charm comes from the way in which in blends reality and fiction. How much of what we’re watching is a reflection of reality? Are the actors using their real life personas? Are the inner workings of Hollywood really this crazy?

It centres on an epic housewarming party being thrown by James Franco (127 Hours, Spider-Man). On the invite list is his great friend Seth Rogen (who he starred with in Pineapple Express) along with the likes of Jonah Hill (Moneyball), Michael Cera (Superbad), Jay Baruchel (She’s Out Of My League), Danny McBride (Your Highness), Craig Robinson (Hot Tub Time Machine), Emma Watson (Harry Potter) and even Rihanna.

There’s binge drinking, pot smoking and a splash of fornication. In other words, it’s a standard Hollywood get-together… well… at least until the apocalypse arrives. Giant sinkholes open up in the ground, the neighbouring hills catch on fire and complete pandemonium breaks out. Only a handful of party guests survive the carnage and until can they figure out what the hell is going on, they board up the windows and take refuge in James Franco’s luxurious house.

The story’s not that important though. This Is The End is just a bunch of celebrities taking the piss out of themselves for two hours. If you’re familiar with their previous films, you’ll be laughing often and laughing loudly. I don’t want to give too many of the jokes away (as they are so random) but to give you a small taste of what’s on offer, there a humorous moment when James and Seth put together a fake trailer for Pineapple Express 2 to help pass the time.

Adding to the film’s hilarity are the varying levels of “friendship” shared between the characters. James Franco idolises Seth Rogen to the point that he has a giant painting of Seth’s name on his wall. On the flip side, it’s clear that Jay Baruchel isn’t a fan of Jonah Hill’s over-the-top niceness. As for Danny McBride, no one likes him at all!

The inspiration for This Is The End came from a 2007 short film created by Evan Goldberg (a writer behind Pineapple Express and Superbad) and friend Jason Stone. I don’t know if this will kick start a fad of similar movies but considering it recovered its $32m budget in less than a week at the U.S. box-office, it will get a mention in boardroom meetings at the big studios.