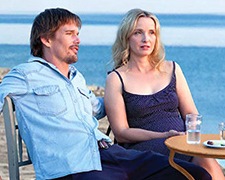 In 1995, two twenty-something strangers met on a train and spent a one-off evening walking through Vienna. You couldn’t ask for a more romantic encounter. They chatted for hours and flirted constantly – all against the backdrop of one of the world’s most beautiful cities. The next morning, they boarded separate trains and returned to their regular lives. That film was Before Sunrise.

Nine years later, they would meet for a second time. Jesse (Hawke) had taken the events of that night and transformed it into a best-selling novel. A copy had found its way into the hands of Celine (Delpy) who, realising that it was based on their fateful evening, tracked Jesse down while at a book signing in a small Parisian bookstore. The two spent the afternoon roaming the streets of Paris and catching up on the past decade. That film was Before Sunset.

If you haven’t seen either of these films, that’s your homework before you catch Before Midnight. You could try to watch this as a “stand alone” movie but those already acquainted with these characters will find it far more satisfying. It’s just like going to a dinner party. If you’re familiar with everyone at the table, you can relax and get straight into some great conversation without the obligatory “getting to know you” stuff.

This final instalment in Richard Linklater’s trilogy has been crafted from the same mould as the earlier films. It’s set over the course of a single day in southern Greece and features lengthy conversations between Jesse and Celine. There’s a lot of random small talk (such as a moment when Celine talks about her family’s cat growing up) but as the film progresses, their exchanges become more serious, more significant.

When we first met these characters in 1995, they were young and carefree. Not burdened with the shackles of responsibility, they spoke about their grand, exciting plans for the future. The year is now 2013 and their priorities have changed. Jesse is worried that he’s not spending enough time with his teenage son (from an earlier marriage). Celine is frustrated with her current job and is looking for something new. Both have doubts as to whether they can maintain a long-term commitment to each other.

There’s no huge revelation in Before Midnight. There’s no big twist. It’s not trying to sell the secret of a great marriage. It’s not trying to make you feel warm and fuzzy. The reason this film will hold your attention for two hours is because of the natural dialogue between Ethan Hawke and Julie Delpy. Put simply – they make these characters interesting. Their compliments, their arguments and their reflections will have you drawing comparisons with your own relationships.