Review: The Way Way Back 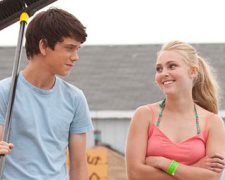 For two guys who have made a career out of landing small supporting roles, many where shocked to see Nat Faxon and Jim Rush standing on stage at the Oscars last year with the coveted 13 ½ inch statuette in their hands.  They weren’t there for their acting talents.  Rather, they were part of the writing team for The Descendants (along with director Alexander Payne) which picked up the Academy Award for best adapted screenplay.

Following in the footsteps of many other screenwriters, Faxon and Rash have made the transition to directing with their feature debut, The Way Way Back.  It’s a nicely told coming-of-age tale and centre stage is an introverted 14-year-old named Duncan (James).

In the leading role, newcomer Liam James delivers an immensely likeable performance.  Duncan comes across as a sweet, good-natured kid but you get a strong sense that he’s not comfortable with himself.  He’s bottled up his adolescence insecurities and he seemingly has no family or close friends to confide in.

That changes when he meets Owen (Rockwell), a goofy, care-free guy who manages Water Wizz – a local waterslide park.  Owen develops a soft spot for Duncan and offers him a part-time job so he can earn a few dollars over the summer.  What started out as the worst holiday ever… is about to become one he will never forget.

Many of us will have memories of our favourite family holidays and that’s exactly what The Way Way Back is trying to tap into.  We visit exciting places, we do surprising things and we make new friends.  This film’s best scenes are those at the waterslide park where some fun, light-hearted moments are shared between Duncan, Owen and the rest of the Water Wizz staff.  Duncan slowly emerges from his shell and it’ll leave you with a satisfied smile on your face.

Not as strong are the subplots involving Duncan and his family.  We’re never treated to their full history and so we don’t understand the extent of Duncan’s connection with his father (who we never meet) nor the strange relationship shared between Duncan’s mother and her new flame.  These elements needed to be fleshed out in more detail or scrapped entirely.

My thumbs are still up though.  The Way Way Back was produced for just $5m and it’s great to see it being released theatrically in Australia.  If you’re tired of superhero movies and want to be charmed by a heart-warming comedy, this is the film for you.