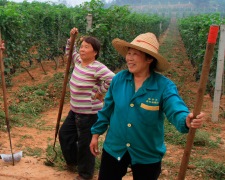 In Alexander Payne’s Sideways, released back in 2005, Virginia Madsen asks Paul Giamatti why he hasn’t yet opened his bottle of a 1961 Cheval Blanc. He responds by saying that he’s waiting for a special occasion with the right person. I’ve never forgotten her retort – “the day you open a ’61 Cheval Blanc… that’s the special occasion”.

Red Obsession is an Australian-made documentary that begins by illustrating our fixation with a great bottle of wine. Those professing their love on camera include British broadcaster Michael Parkinson and American film director Francis Ford Coppola.

When it comes to red wine, there’s one part of the world that has been respected for more than 2,000 years – the Bordeaux region in western France. When you hear the vineyard managers use phrases like “bringing love to the wine”, you get a strong sense of their passion and devotion. You might also think they’re a little crazy.

With the background established, Red Obsession reveals its true focus. This isn’t a film about wine. Rather, it’s a film about economics. We learn that over the past 30 years, wine has been transformed from a drink… into an investment. Prices have skyrocketed and some savvy investors have made more money through wine trading than their counterparts on the stock market. Some bottles of wine are now considered too valuable to drink!

This is textbook example of what all budding economics students are taught in their first year – supply and demand. Supply will always be limited. Even with a season of ideal rainfall and perfect temperatures, there’s only so much wine that can be produced.

As for demand, it’s rapidly increasing. China’s economy has grown at obscene rates in recent years and so too has their interest in luxury goods. They are now the world’s biggest importer of wine from the Bordeaux region. There’s a humorous scene where a group of Chinese wine critics are running to get a seat after the doors are opened at an important wine tasting exhibition. It’s like watching teenage girls at a One Direction concert.

Like any good documentary, Red Obsession provides much food for thought. Will demand continue to increase in China and if so, how will it be met? Are fast-rising prices good for the industry in the long-term? Do we want to reach a point where the top Bordeaux wines can only be afforded by multi-millionaires? What about the effect of the growing counterfeit market?

The film also makes some interesting points about the role of wine critics, the significance of brand name recognition, the 2008 global financial crisis, and the cultural revolution that has enveloped China. Australian directors David Roach and Warwick Ross are to be commended on the wide breath of material they have covered in the tight 75 minute running time.

With the added star power of Russell Crowe, who serves as the film’s narrator, Red Obsession premiered at the prestigious Berlin Film Festival back in February. Two months later, it screened at the Tribeca Film Festival in New York where host Robert De Niro named it as one of his favourite films. Who'd have thought a film combining red wine with economics could be so informative and entertaining? Red Obsession is one of the year’s best documentaries.

You can read my interview with director Warwick Ross by clicking here.