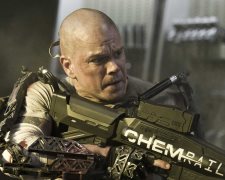 Don’t expect these issues to be addressed in our lifetime… at least according to writer-director Neill Blomkamp (District 9). Elysium is set in the year 2154 and paints a bleak, depressing view of our future. The planet has become overpopulated and riddled with disease. With its run-down buildings and make-shift shanty towns, Los Angeles now resembles a Third World city.

Not everyone is doing it tough, however. A giant satellite, known as Elysium, has been orbiting the planet for several decades. Put simply – it is paradise. Complete with clean air and an artificial atmosphere, Elysium’s citizens have everything they could ever need – luxurious mansions, spacious parklands, unlimited food and revolutionary medical care. It is home to the thousands of families… who can afford it.

The film’s central character is Max (Damon) – a broke ex-con on a desperate quest to survive. After being exposed to radiation in his not-so-safe workplace, Max is given less than a week to live. As the saying goes – “beware of the man who has nothing to lose”. Knowing his only chance is to access the life-saving medical machines on Elysium, Max will do whatever he can, rightly or wrongly, to secure a shuttle ticket.

Avoiding a simple “Max versus the world” type storyline, Blomkamp offers more of a challenge with several subplots running concurrently. All of the characters are looking to shake up the current “system” and make a better life for themselves but they have different ideas, different motivations.

On one hand, there’s Elysium’s power-hungry Secretary of Defence (Foster) who is unhappy with the community’s loose border protection policies. With the help of a financially-driven businessman (Fichtner) and a violence-driven sleeper agent (Copley), she wants to cure Elysium’s “political sickness” and overthrow the government.

On the other hand, there is an Earth-based group of revolutionaries looking to shift the class warfare scales. They’re somewhat self-interested (money, money, money) but they want to infiltrate Elysium and make sure it’s technology is accessible by all as opposed to the privileged few.

Blomkamp’s approach reminded me of films such as Blood Diamond and Green Zone. He’s trying to make a statement about certain political / social issues but to make it more palatable, it’s been packaged as part of a Hollywood-style action film.

Elysium is too action-heavy in its second half and the ending is a little too simplistic. With so many subplots and so many issues to explore, it was always going to be difficult to resolve them sufficiently inside of two hours. Some messages get lost.

Still, the film is to be commended for its thought provoking premise – something we haven’t seen in many films over the U.S. summer. It also provides us with an interesting, metaphoric look into the future. The technology is hard to wrap your head around, evidenced by Matt Damon’s robotic limbs and the concept of a human “data heist”, but you will be wondering how much of this could become reality.

Elysium is not as creative or engaging as Neil Blomkamp’s feature debut, District 9, but this follow up solidifies his reputation as a visionary filmmaker who is prepared to take chances and think outside of the box. Not bad for a 33-year-old.

You can watch my chat with star Matt Damon right here...