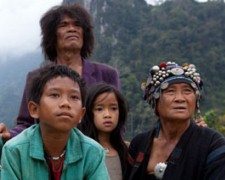 I’ll freely admit that I know nothing about the country of Laos. Wikipedia tells me that it’s a landlocked country in Southeast Asia that is home to roughly 6.5 million people. It is one of the world’s last communist dictatorships (along with China, Cuba, Vietnam and North Korea) and the country went through a brutal civil war from 1953 to 1975 where tens of thousands of people were killed.

The Rocket tells a great story (we’ll get to that in a moment) but it’s also worth your time because it takes us inside this unheralded country. Writer-director Kim Mordaunt, a graduate of the University of Technology Sydney, has worked in Laos for several years. In 2007, he put together the much acclaimed documentary Bomb Harvest – a documentary that follows an Australian bomb disposal specialist who was training Laos locals in the aftermath of their civil war.

The Laos government was impressed with Mordaunt’s work and the way the film raised awareness of the issue to the wider world. They then granted him permission to make a follow up but instead of going with another documentary, Mordaunt has crafted a fictional drama that brings together the country’s history, its curious traditions and its beautiful landscape.

Tourist operators in Laos will be pleased with the result. After winning the award for best feature by a first-time filmmaker at the prestigious Berlin Film Festival back in February, The Rocket has gone on to win the Audience Award at the Sydney Film Festival, the Melbourne Film Festival and the Tribeca Film Festival in New York City. The bottom line – it’s not just me who has liked this film. It’s proved itself as a heart-warming crowd pleaser.

The story centres on a mischievous 10-year-old boy named Ahlo who has been blamed for his family’s bad luck since the day he was born. The reason? Ahlo was born a twin. The tribal belief is that twins carry a curse and while the other baby did not survive childbirth, Ahlo’s grandmother still looks down on him. She’s also quick to point the finger when the family is forced by the government to leave their long-held home to make room for a new dam. This is Ahlo’s fault.

The family try to find a new home but with next-to-no money, they are continually made to feel unwelcome at the villages they come across. Ahlo is determined to prove himself though. He’s tired of being the family’s “curse” and wants to show everyone that a determined, hard-working kid with a lot to offer… including a little good luck!

Having been subjected to a barrage of reboots, remakes and sequels over the past few months, many of the comic book related, The Rocket comes along like a breath of fresh air. It has a great story to tell and subtly mixes the comedic and dramatic genres. Some moments will leave you smiling. Other moments will leave you on the edge of your seat.

The leading role, youngster Sitthiphon Disamoe is wonderfully loveable as Ahlo. He had no prior acting experience but after a lengthy casting process, Mordaunt was drawn to his energetic personality and his personal background – Disamoe was a kid living on the streets of Laos and selling candy to survive. He acts like a 10-year-old too – something we don’t often see in Hollywood movies where the dialogue is so scripted that all kids talk like mature adults.

There’s always debate in Australia about what kind of films we should make in this country. We often try to make films that promote our heritage, our culture and our unique sense of humour. I’m not questioning that methodology but movies like The Rocket highlight that there are people outside of our borders and they too have stories to share. The idea of an Aussie film shot in Laos might have been a tough sell to investors but the end results speak for themselves. It’s one of this country’s best films in recent years.