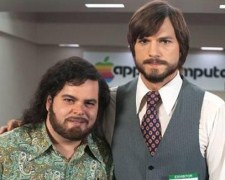 Using a common film technique, Jobs begins with its ending. Wearing his trademark black turtleneck and blue jeans, Steve Jobs (Kutcher) stands on a stage in front of his employees. The year is 2001 and he talks about a product that will dramatically change the music industry. It’s a device that can hold 1,000 songs and fit comfortably in your pocket. Of course, I’m speaking of the iPod.

That simple product would help transform Apple into one of the world’s wealthiest companies and Jobs into a multi-billionaire. But what was Steve Jobs really like? How did he get started in the computer industry? Where did his ideas come from? Who helped him along the way? Was he easy to work with? These questions are the focus of Joshua Michael Stern’s (Swing Vote) feature film – the first to explore Jobs’ life.

As someone who knew very little about Steve Jobs going into the theatre, I found the film moderately interesting. Yes, it’s a dramatization and yes, it’s only focusing on certain parts of life but there’s enough to paint a clear picture of his zealous determination and his continual pursuit of perfection. These traits helped kick start his career but they would later become an obstacle as Jobs had to manage the expectations of Apple’s board and its stockholders (following the listing of the company).

Watching this film, it’s hard not to make a comparison with David Fincher’s brilliant drama, The Social Network, which chronicled the beginnings of Facebook. With some cracking dialogue from Aaron Sorkin, Fincher’s film took us inside the head of creator Mark Zuckerberg and asked the question – is he a misunderstood genius or a lonely sociopath?

This is where Jobs suffers. For much of the film, it felt like we were going through the major milestones in his career – some good and some bad. All of this information could be found in a simple internet search and while it may be of interest to some, it’s not going to provide any new perspective for those already familiar with Jobs’ life.

What doesn’t come through in the movie is a true sense of who Steve Jobs was as a person. For example, Matt Whiteley’s screenplay provides a very limited view of Jobs’ relationship with his girlfriends and family. This is strange given that he goes to the trouble of introducing them as characters.

I’ve seen reviews critical of Ashton Kutcher’s performance but I’m not as negative. He’s fine in the leading role and he does a decent job mimicking Jobs’ walk and other mannerisms. The supporting players, led by the likes of Dermot Mulroney, Matthew Modine and J.K. Simmons, also hold their own. It’s just a shame they didn’t have a stronger script to work with.

A second film about Steve Jobs, written by The Social Network’s Aaron Sorkin funnily enough, has been spoken about over the past year. Sorkin has revealed that his screenplay contains just three lengthy scenes and all of them will shot in real time. Each scene takes place just prior to an important Apple product launch. The film is not yet in production but if it does manage to get off the ground, I’m hopeful that it will dig a little deeper than this effort.