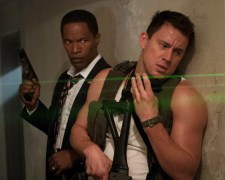 The events of September 11, 2001 instilled fear into many citizens of the United States. The government responded by increasing its surveillance powers and creating the Department of Homeland Security. Airports radically overhauled their security procedures through enhanced checkpoint screenings and the installation of bulletproof cockpit doors. Whether you supported the measures or not, they played a part in making Americans feel safe again.

Now, here we are in the year 2013, watching two big-budget movies about a major terrorist attack in Washington D.C. Back in April, we were “treated” to Olympus Has Fallen where a tainted Secret Service agent (Gerard Butler) saved the day after the President was kidnapped by a group of angry North Koreans intent of kick starting a nuclear war. If you missed it… you were lucky. The film was rubbish.

White House Down follows in its footsteps. In its defence, at least it isn’t falling in the tired cliché of using a villain from the Middle East, North Korea or Eastern Europe. It’s a very pissed off American that wants to extract revenge against the President (Foxx) after his son was killed in Iran while serving in the U.S. Army. He can’t do the job alone and so he’s assembled a heavily armed team that includes a few disgruntled ex-military guys, a computer hacker and a “right-wing socialist”.

They storm the White House, kill every member of the Secret Service and take a bunch of hostages. Unfortunately, the President manages to evade their capture thanks to his new best friend – a wanna-be Secret Service agent named John Cale (Tatum) who just so happened to be taking a tour of the White House with his daughter when pandemonium broken out. It’s up to them to rescue the hostages and ensure the bad guys don’t get their hands on the nuclear launch codes. Gasp!

Cinema is a curious art form and White House Down illustrates the importance of a film’s tone. Given events in their recent history, one might think that a violent movie about a terrorist attack in the U.S. capital might be tough for Americans to watch. Not so. As he’s done in the past with films such as Independence Day, Godzilla and The Day After Tomorrow, director Roland Emmerich has taken a heavy subject matter and packaged it as “light entertainment”.

Jamie Foxx isn’t that believable as the President but there’s some fun chemistry between he and Channing Tatum as they fight their adversaries. This links to the film’s major strength – its comedy. Quite a few moments will generate a laugh from the audience and they range from the silly actions of a passionate White House tour guide… to a subtle dig at the mainstream media when Al-Qaeda is first blamed for the attacks.

Unfortunately, the rest of White House Down is a standard action fest. Channing Tatum flies through the air in slow motion, he slides across a table in slow motion, he jumps through a window in slow motion and he falls through a glass ceiling in (wait for it) slow motion. It’s not offering us anything we haven’t seen before. We even get the familiar countdown clock in the finale where our heroes are given the longest 8 minutes ever recorded.

While there a couple of half-decent twists, the plot lacks coherence. Characters behave in a manner that often doesn’t make sense. It’s like watching a bad horror movie where the victims act as if they want to get caught. The film also uses a well-worn subplot where John Cale risks the lives of millions to save his own daughter. Does this make him a hero or an idiot?

It’s better than Olympus Has Fallen but there was still a lot of room for improvement with White House Down.