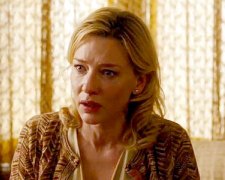 The greed, corruption and mismanagement that led to the 2008 global financial crisis have been covered in numerous movies over the past few years. We’ve had feature dramas such as Margin Call, Too Big To Fail and Wall Street 2: Money Never Sleeps. We’ve also been treated to some great documentaries including Capitalism: A Love Story and the Academy Award winning Inside Job (a personal favourite of mine).

This new film from Woody Allen tackles the same subject matter but comes at it from a different angle. Blue Jasmine doesn’t focus on the rich finance guy doing bunch of dodgy, unethical stuff. Rather, we see things from the perspective of his wife.

When we first meet Jasmine (Blanchett), she’s rocking up at the doorstep of her sister, Ginger (Hawkins), who lives in San Francisco. She’s not there because she wants to catch up with her younger sibling. She’s there because she has nowhere else to go. Jasmine was once the wife of an extremely wealthy investment manager (Baldwin) living in New York but she lost everything after her husband was convicted of massive fraud and sentenced to prison.

It’s been tough for Jasmine to deal with her quick descent from “riches to rags”. This is a woman who has grown very, very accustomed to her life as a wealthy socialite. Given she’s never had a job and shows little interest in the daily news cycle, Jasmine’s conversation starters tend to be limited to her lavish overseas holidays, her expensive shopping trips and her husband’s successful real estate investments.

Jasmine may sound like a selfish, narcissistic human being but Woody Allen’s masterful screenplay doesn’t judge her. This could easily have been crafted as a simple comedy where we go “ha ha, let’s laugh at his dumb woman who is finally getting what she deserves.” Thankfully, it’s much deeper than that. There are moments where we get to see behind Jasmine’s selfish, delusional exterior and find someone who is troubled, scared and insecure.

It will be a sad day when Woody Allen finally retires from filmmaking. It’s been 35 years since Annie Hall swept the Academy Awards (winning best picture, director, screenplay, actress) but Blue Jasmine proves the 77-year-old can still make a memorable black comedy complete with distinctive characters (thanks to quality casting) and wonderful dialogue.

I’m also a fan of the way Allen uses multiple timelines in Blue Jasmine. The current day setting sees Jasmine trying to get along with her sister, find a job and meet a new man. This is interwoven with flashbacks from Jasmine’s past where we learn about her hoity-toity life in New York City and gather a better understand of why she is the way she is. The non-chronological format also allows Allen to slip in a few unexpected twists (but let’s keep quiet about that).

I can’t avoid the subject matter any longer. If there’s one reason to see this film… it’s the amazing performance of Cate Blanchett! Describing Jasmine as having “delusions of grandeur to an epic proportion”, it’s not hard to see why she was attracted to the complicated role.

It’s fascinating to watch Blanchett play a character that is so very hard to like. Just when you start to have a little empathy towards Jasmine, she’ll do something or say something to instantly squash such feelings. She’s a certainty to receive an Oscar nomination and while we’re at it, I also think Sally Hawkins (Happy-Go-Lucky) deserves similar plaudits for her performance as Jasmine’s subservient sister.

If you’re someone who likes to put together a top 10 list at the end of each year, see Blue Jasmine and you’ll only need to find 9 more.