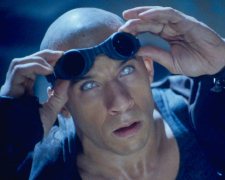 Since mid-March, I’ve seen just over 100 films in Brisbane cinemas of which 15 have been sequels/reboots. You can add one more to that total with Riddick – the third instalment in this franchise following Pitch Black in 2000 and The Chronicles Of Riddick in 2004. Vin Diesel (Fast & Furious) is back in the leading role but aside from an insignificant cameo from Karl Urban, it’s a completely new cast.

I can’t remember much from the earlier films (well, it has been 9 years) and this film doesn’t provide much in the way of background. It’s opens with an injured Riddick (Diesel) stuck on an unknown planet and doing whatever he can to survive. Water is hard to find and he must fend off an array of nasty creatures including wild dogs and some kind of scorpion thingy. Both have long, sharp teeth.

Riddick eventually finds a deserted settlement and is able to activate an emergency beacon. Help won’t be forthcoming though. Two spaceships arrive filled with heavily armed men looking to kill Riddick. They’re bounty hunters and are hoping to cash in on a substantial reward – which will be doubled if Riddick is brought back dead as opposed to alive.

That sets the stage for the remainder of the film – a cat and mouse game where Riddick tries to evade and outsmart the bounty hunters. He may not be much of a conversationalist but Riddick has the strength, the intelligence, and the knowledge of the local area to be a formidable opponent. His goal is to steal one of the spaceships and escape this desolate planet.

I’m a little surprised to see this franchise being reinvigorated. The 2004 sequel had a budget of more than $100m and struggled to recoup that at the international box-office. Writer-director David Twohy has gone with something smaller this time. Riddick was produced for just $38m and it comes with a smaller cast and shorter action sequences.

Put simply, it’s not a great film but it’s still watchable. I like the setting and the freaky alien creatures that Riddick encounters. You know he’s going to survive… but it’s not always obvious as to how he’s going to do so. It’s also fun watching him get the better of the bounty hunters. The film doesn’t shy away from violence and as an example, there’s a graphic scene that involves someone’s head being sliced open like a tomato (which got quite a laugh at my preview screening).

That’s about all there is to it. Vin Diesel doesn’t say a lot – and that’s a good thing. He speaks in a dull, monotone voice and it’s often hard to work out if he’s just mumbling or actually saying something! Fans of Diesel won’t have a problem but others might be wondering how he’s developed a reputation as an action hero (particularly given his similar personality traits in the Fast & Furious franchise).