Review: One Direction: This Is Us 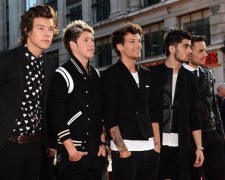 There were roughly 60 people at the preview screening I attended a few weeks ago for One Direction: This Is Us. Of those, 4 were male. One was a father with his two kids. Another was a teenager accompanying his girlfriend. That just left myself and a friend – who I invited along so we could catch up… but also because I felt too insecure to see this film on my own.

You’d be hard pressed to find another release in 2013 with such a narrow niche audience. If you’re a fan of One Direction (of which a significant percentage are teenage girls), then you’re likely to love this. It’ll be the best film you’ll see all year! You’ll be screaming when they take off their shirts and you’ll be swooning when they do something cheeky.

But what if you’re not a One Direction fan? Is it still worth seeing? The answer is a clear no. We’ve been treated so some great music documentaries over the years that take us inside the industry and show us the many ups and downs. Examples include Searching For Sugar Man, Metallica: Some Kind Of Monster and Dig! The power of these documentaries is that they take an obscure subject matter and extract a narrative that can engross a wide audience (and not just fans of the artists).

That’s not the case here. One Direction: This Is Us feels like a 90 minute advertisement that has been created to further promote the One Direction brand. Liam, Harry, Louis, Niall and Zayn travel across the world as part of their Take Me Home Tour and take turns talking about their love for their fans, their family and the other members of the band. This is interwoven with a bunch of songs and footage of teenage girls screaming and/or crying. That’s all there is to it.

Given that the group has only been together since 2010, they don’t exactly have a huge catalogue of hits to choose from. We see them perform their most famous songs – including “One Thing” and “What Makes You Beautiful” – but they have to fall back on cover versions to make sure there’s enough music content in the film. Songs they’ve borrowed include Wheatus’s “Teenage Dirtbag” and Blondie’s “One Way Or Another”.

The film has been directed by Morgan Spurlock – the man who helped change the fast-food industry in 2005 with his Oscar-nominated Super Size Me. It’s hard to understand why Spurlock was attracted to a project like this (well, aside from the pay cheque). Was there a clause in his contract preventing him from including anything negative? The closest we get are the band members getting tired because of their “gruelling” tour schedule. They don’t complain though. They’re too nice, too mature to do that.

It ties back to a broader problem with society and our desire to look at things through rose-coloured glasses. Are we not allowed to display any sign of weakness, insecurity? Politicians now speak like robots – repeating the same slogans and buzzwords again and again. They know if they show any doubt in their party’s policies or leadership, they’ll be hung by the media. How dare they be honest and give us their personal opinion!!!

Sorry for my divergence. Let me try to tie this back to the film. While it’s sweet to hear from the boys’ parents and their fanatical supporters, I grew tired of all the compliments and back slapping. Did no one have an opposing point of view? I wish I could have heard from their minders and security personnel. Perhaps they could have offered a more insight into the boys’ personalities and the extent to which their lives are managed to help protect the valuable One Direction brand.

Meh, I should probably stop complaining. While I’ll confess that some of their songs are catchy, this film wasn’t created for “non-Directioners”. There’s footage of a passionate fan who says – “I know they love me even though they don’t know me.” That’s who this film is meant for.