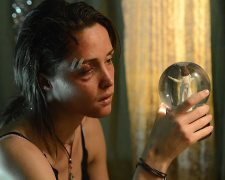 Having made some great dramas in the past including The Bank and Balibo, Australian director Robert Connolly was looking for something very different for his next project. He found it in the pages of Tim Winton’s award winning novel from 2005, The Turning. The end result? You’re unlikely to find a more original film-going experience this year.

For starters, this isn’t one film. It’s a collection of 17 short stories told one after the other. Each has a different director with Connolly getting a mix of friends and colleagues to contribute. They include established directors such as Warwick Thornton (Samson & Delilah) and Tony Ayres (The Slap) as well as actors-turned-directors such as Mia Wasikowska (Alice In Wonderland) and David Wenham (Gettin’ Square).

The film’s budget was split equally amongst the 17 directors and each was asked to adapt one of the short stories from Winton’s novel. When you put them all together, it’s a lot to get your head around. Each chapter has a different tone, a different style, a different cast. Connolly describes the film as liking setting foot in an art museum – some pieces will jump out and grab you while other pieces won’t interest you at all. If you’re seeing it with friends, there should be plenty to discuss afterwards, whether you like the movie or not.

Another point of differentiation is the film’s length – it clocks in at a whopping 180 minutes. Don’t worry though. You won’t be sitting on your ass the entire time. Connolly has obtained approval from cinemas to have a 20 minute interval at the half way mark. You’ll be able to get up, stretch the legs, go to the bathroom and replenish your drink at the bar. It’s a nice touch. The last time I remember an interval in a movie was Kenneth Branagh’s Hamlet, released back in 1996.

Those who see the film during its first two weeks will also be provided with a complementary program. It’s another homage to the world of theatre and in addition to being a nice keepsake, it provides some food for thought after you’ve left the cinema. You can read up about each director and pick up on some of the details that you might have missed during the first viewing.

I’ve often believed that the less you know going into a film, the better. You simply jump on the director’s shoulders and see where he or she takes you. That said, I think a little background information is required for The Turning (at least in my opinion). For example, it took me a while to realise that some of the characters in these stories are the same – despite being played by different actors. There are clues to help you along the way but they’re not easy to pick up, especially if you’re not looking for them.

This is a tricky film to review in the sense that I feel like I should be grading each of the 17 short stories. Some come with a strong emotional climax and my favourites included Big World (about two guys travelling in a Kombi across Australia), Aquifer (about a man who hears a news story that brings back memories of his childhood) and Commission (about a son who tracks down his estranged father living a solitary existence in the remote outback).

On the flip side, there were some stories that left me bored, unresponsive. They either didn’t ring true (such as the story of a disillusioned AFL footballer who quits the sport in the middle of a big match) or didn’t seem to have much of a point (such as a story involving Cate Blanchett and Richard Roxborough who turn up at the wrong house for a Christmas party).

Despite my admiration for several of the short stories, I didn’t take away a great deal from the film as a whole. There’s a recurring theme about the past and how it’s difficult to escape but given that the stories are so difficult to link (because of the different cast/style), it doesn’t come through strongly.

I don’t want to sound too negative though. While The Turning didn’t fully satisfy my cinematic appetite, at least it’s bold enough to be different. I’m glad to have seen it.

You can read my interview with creator Robert Connolly by clicking here.