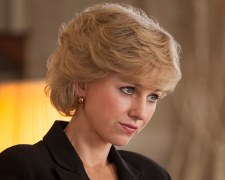 If anything else, Diana highlights the difficulty of creating a biopic centred on someone with whom the public is already very familiar. For starters, you have to offer a new perspective. A simple rehashing of key events isn’t going to cut it. This is where the recent Steve Jobs biopic with Ashton Kutcher suffered. Much of its content could be gathered from a simple internet search. On the flip side, Behind The Candelabra went much further. It opened our eyes to Liberace’s secretive private life and, after being showered with praise, won 11 Primetime Emmy Awards.

It’s also critically important that the film is well researched and based on facts. In the 2004 release, The Prince & Me, a young Danish price (Luke Mably) tried to win the heart of a simple college student from the United States (Julia Stiles). It’s essentially the same premise as Diana but with the genders reversed. A fictional work such as The Prince & Me has a far greater degree of flexibility when it comes to story. You can take it in any direction you like. That same luxury isn’t available with a film like Diana. People want the truth. They don’t want a heavily modified version of events.

To its credit, Diana tries to take us inside a lesser known part of her life. We don’t see the Queen or Prince Charles and there’s only a (unnecessary) fleeting glimpse of William and Harry. The crux of the film focuses on her love affair with a Pakistani heart surgeon by the name of Haznat Khan. The pair met in mid-1995 and remained close until Diana’s death on 31 August 1997 (a date etched it the memory of any Diana fan).

So where did writer Stephen Jeffreys and director Oliver Hirschbiegel (Downfall) garner the details about their relationship? Well, this is where the film’s problems begin. The screenplay is based on Kate Snell’s 2001 novel, Diana: Her Last Love. Khan was a deeply private individual who has never spoken in detail about the time he spent with the late Princess. He told a British newspaper that Snell’s book is based on “hypotheses and gossip”. His thoughts on the film? “There’s no way I am going to go anywhere near it.”

The early scenes show us that Diana (Watts) as an ordinary, kind-hearted woman. We see her cooking in the kitchen, jogging in the park and playing a tune on her piano. She’s gracious to her support staff (giving them the evening off after a long day) and she cares deeply for her two children (while being frustrated at the limited visitation rights being offered by the Palace). It’s not terribly exciting stuff but I was happy to buy into it. I got the message that Diana was a nice gal.

The arrival of Haznat Khan (Andrews) transforms the film into a cheesy soap opera. Diana was attracted by his good looks and the fact “he doesn’t treat me like a Princess.” Khan was attracted for reasons that are never made clear – he’s an unaffectionate guy who keeps his cards close to his chest. Neither wanted to endure the never-ending gaze of the paparazzi and so they kept their relationship a secret. There’s a laughable scene where Diana wears a long brunette wig so that she could hide her identity while they grabbed a drink at a popular jazz club. Really? This happened?

Unfortunately, it gets worse. Diana is portrayed as a deeply insecure individual. After his first encounter with Khan, we see her anxiously sitting on the window sill and waiting for him to call. When the two have a disagreement, we see Diana turning up at his apartment and washing his dishes in an attempt to win back his favour. There’s even a moment where she’d standing on his doorstep in the middle of the night and screaming for forgiveness (oh, and with mascara running down her face). I've seen Nicholas Sparks adaptations that were more credible than this.

When you throw in a few underdeveloped subplots (such as her strange dreams and her equally strange relationship with Dodi Fayed), we’re left with a total package that doesn’t feel right and doesn’t add up to much. I have no issue with a film about Princess Diana… but if someone is going to try it again in the near future, they'll need something with more realism and engagement.