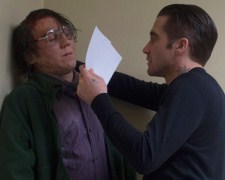 Two very young girls are missing. While their respective families were getting ready for a Thanksgiving dinner, they wandered out onto the street and disappeared without a trace. Detective Loki (Gyllenhaal) is the man responsible for the investigation. He’s not one of those charismatic, razor-sharp cops that we see in television shows. Loki comes across as a tired, unmotivated individual. His hair is unwashed and his constant blinking suggests he’s in desperate need of a good night’s sleep.

He’s the film’s most interesting character and it’s a great performance from Jake Gyllenhaal (Brokeback Mountain, Zodiac). Loki doesn’t fit the mould of your typical “hero”. He likes to keep to himself and isn’t much of a conversationalist. You could even describe him as boring. He’s not perfect either. While he’s doing enough to pass his annual performance appraisal, Loki does make the occasional error in judgement and does struggle to stay motivated.

Can he put the pieces of this puzzle together and solve the case? Well, screenwriter Aaron Guzikowski (Contraband) and director Denis Villeneuve (Incendies) are going to make it as difficult as possible. They’ve put together a two and half hour film with plenty of twists to keep the audience guessing. Some are believable. Others don’t make a lot of sense (and imply gross incompetence on the part of the police force).

One person who should be assisting Detective Loki is Keller Dover (Jackman), the father of the one of the missing girls. Unfortunately, the trauma of the moment has clouded Keller’s sense of right and wrong. He’s already made up his mind about who’s responsible. A strange looking guy by the name of Alex Jones (Dano) was seen close to the house at the time of the girls’ disappearance. The police can’t find any evidence against Alex (they’ve searched his house, his caravan) but Keller remains convinced.

Instead of leaving the investigation to the authorities, Keller decides to take matters into his own hands. He kidnaps Alex Jones and takes him to an abandoned building in a rundown neighbourhood. Suffice to say it’s not for a friendly chat. Keller is going to use torture against Alex until he confesses to the crime and reveals the location of this daughter.

I liked the idea of this “vigilante justice” subplot. It creates greyness. Keller is clearly acting outside the boundaries of the law… but does the end justify the means? Disappointingly, the film doesn’t explore the risks and the consequences strongly enough. It also goes down some silly paths in the second half (without giving too much away) that avoid the tough moral quandaries. We’re left with a drawn-out, unnecessarily complex thriller.

Meh, what do I know? The film took 3rd prize (as judged by the audience) at the prestigious Toronto Film Festival last month (behind 12 Years A Slave and Philomena) and has comfortably clawed back its $46m budget at the U.S. box-office. My lukewarm opinion leaves me in the minority. Prisoners held my attention but with a little more credibility, this could have been something far more thrilling.