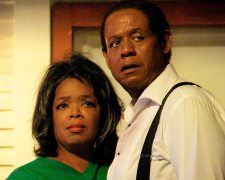 The Butler is the story of Cecil Gaines (Whitaker) – an African-American who worked as a butler at the White House for 34 years. He would polish the expensive cutlery, he would make tea in the Oval Office and he would serve foreign dignitaries at state dinners. Working for 8 different presidents, from Eisenhower in 1957 through to Reagan in 1984, Gaines had a front-row seat to an important time in America’s history.

It’s important to note that this is a fictional drama and not a biopic. There is no real Cecil Gaines. Don’t go home after you’ve left the cinema to find out more about him. Gaines is the creation of screenwriter Danny Strong (Recount, Game Change) who drew his inspiration from the true story of Eugene Allen – a man who was a butler at the White House for 34 years. A few anecdotes from Allen’s life have been used in the film but for the most part, this is a work of fiction.

My concern with this film is that it’s trying to squeeze too much into its 132 minute running time. With so many actors and so many subplots, it felt like I was watching a rushed chronology of civil rights events than an engaging, character-driven story (like we saw in 2011’s The Help). A friend of mine summed it up best when he thought this would work better as a mini-series. I could even picture it as a West Wing style drama.

There’s a catchy line in the movie – “everything you are and everything you have is because of that butler” – but I struggled to come up with that same conclusion from the film’s content. Not enough time is spent examining the interaction between Gaines and each president. We get quick, fragmented scenes that feel scripted and a little cheesy. For example, there’s a moment where a drunk Richard Nixon (Cusack) tells Gaines that he won’t be resigning in the aftermath of the Watergate scandal.

The Butler seems to spend more time away from the White House and exploring Gaines’ relationships with his wife, Gloria (Winfrey), and his son, Louis (Oyelowo). I say that as a positive because this is where the film works. Gaines enjoys his job and realises its importance… but is it worth the sacrifice of spending no time at home and losing touch with his family? The fact that Louis has been jailed several times for participating in civil rights protests only adds to his troubles.

The performances from the three leading actors are all strong – Forest Whitaker, David Oyelowo and Oprah Winfrey (in her first screen role in 15 years). Director Lee Daniels (Precious) has also been able to find a heavyweight supporting cast with the likes of Robin Williams, James Marsden and Alan Rickman all playing presidents (some are more convincing than others). Deserving the most credit are the make up artists. They’ve done a great job recreating these historical figures and also aging the main cast across five decades.

It’s got the thumbs up from Barack Obama who admitted to “tearing up” and it’s pulled in more than $100m at the box-office in the United States but for me, The Butler covers too much, too quickly.