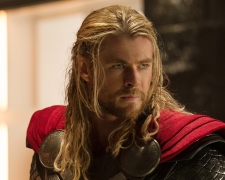 Thor may be great and powerful… but he’s no match for the unstoppable force that is the Marvel franchise. Since X-Men debuted back in 2000, there have been 29 Marvel movies that have grossed more than $12 billion at the international box-office. Four more flicks are scheduled for 2014 and another three in 2015 – including a sequel to ridiculously popular The Avengers.

Star Tom Hiddleston was recently promoting Thor: The Dark World in Australia and I put the question to him – are we reaching a saturating point when it comes to comic book movies? He astutely made the comparison to past eras. In the 1960s we were infatuated with Roman epics and in the 1970s we seemed to make a lot of gangster movies and police thrillers. The reality is that we will eventually lose interest comic book flicks… but as long as they remain fresh and not-so-formulaic, they’ll be around for a few more years yet.

Thor: The Dark World sees our fierce hero (Hemsworth) attempt to save the world from a new adversary. The Dark Elves, led by the particularly villainous Malekith (Eccleston), are trying to get their hands on extremely powerful force that will give him control of the universe. Suffice to say it won’t be the nicest of places if it succeeds. They’re not called the Dark Elves for nothing.

Assisting Thor is a group of characters you should already know. On his home planet of Asgard, we’ll find his domineering father (Hopkins) and a band of loyal soldiers trying to unite the Nine Realms. On Earth, there’s his love interest, Jane Foster (Portman), and her eccentric group of scientific friends including Dr Selvig (Skarsgard) and my favourite character from the original film, Darcy (Dennings).

It’s not the most exhilarating of stories and we’ve seen this stuff again and again. I’m starting to wonder if these films are maintaining the “freshness” that Tom Hiddleston was referring to. The first hour is particularly sluggish as we learn the backstory of the Dark Elves and try to get a grip on the strange force they are trying to possess.

I wouldn’t set your expectations too high but the film is still worth a look for its comedic moments (which dominate the highlight reel). Tom Hiddleston gets the best of the one-liners as Thor’s villainous brother, Loki. Kat Dennings and Stellan Skarsgard make the most of their limited screen time. There’s even an amusing cameo from Chris O’Dowd (The Sapphires). It’s a shame that the two leads, Chris Hemsworth and Natalie Portman, can’t quite generate the same laughs despite obvious attempts.

Cinema managers love Marvel movies and the huge dollars they pull in. There is one downside though. People aren’t going to leave when the closing credits start to roll. They’re going to have to wait a little longer before the cleaning staff can get in and sweep the popcorn off the floor. Fans know that the credits will contain short clips that provide a glimpse of future instalments. That’s again the case here. Make sure you stay until the screen is blank and the cinema lights turned on.

Director Alan Taylor (The Emperor’s New Clothes) isn’t advancing the comic book genre with Thor: The Dark World but he’s done enough to put bums on seats and to keep the franchise going.

You can read my interview with star Tom Hiddleston by clicking here.