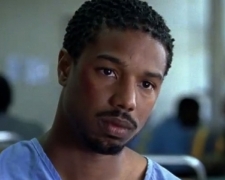 Fruitvale Station begins on the last day of 2008 and finishes on the first day of 2009. It chronicles 24 hours in the life of Oscar Grant (Jordan) – a 22-year-old ex-con living in Oakland, California.

So what’s Oscar like? Why should we care about him? There’s an early scene where he befriends a young woman named Katie (O’Reilly) in the seafood section of a large supermarket. Katie has been asked to cook a fish fry but she has no idea how to go about it. Oscar promptly calls his grandmother, an expert on such matters, puts her on the phone with Katie and saves the day.

It’s clear that writer-director Ryan Coogler wants us to think positively of Oscar. In fact, it’s a little too clear. Coogler has chosen not to delve into the darker elements of Oscar’s past. All we get is a short flashback sequence that shows him in jail – the result of his drug dealing ways. Don’t stress though. Oscar is a nice guy now. We see a shot of him tipping his last batch of weed into the ocean so as to reaffirm to the audience that he’s turned the corner and is now a new and improved man. There’s another moment where he tries to help save a dog who has been hit by a fast moving car.

I’m not trying to flippant. I realise this is based on actual events but these early scenes are too manipulative, too formulaic. Michael B. Jordan (Chronicle) gives a worthy leading performance but given the structured situations in which his character finds himself, it doesn’t feel like a complete, honest depiction of Oscar Grant.

Despite its credibility issues, the film is still able to deliver an emotional finale. Oscar, his girlfriend (Diaz) and a group of close friends head into central Oakland so as to watch the New Year’s celebrations. They catch the train and the film’s title is a reference to one of the stops while en route home. Some will already know how this tragic true story ends but to preserve the film-going experience for those unfamiliar, I won’t reveal any further details. It’s a gripping sequence that is further enhanced by Coogler’s use of handheld cameras.

Fruitvale Station took home both the Grand Jury Prize (as judged by a select few from the film community) at the 2013 Sundance Film Festival. That places it in strong company given that 3 out of the last 4 winners have gone on to earn Academy Award nominations for best picture – Beasts Of The Southern Wild, Winter’s Bone and Precious: Based On The Novel Pushed By Sapphire. It also took home the Audience Award at Sundance – highlighting the impact left on those in the paying crowd.

While I don’t think it worthy of such high praise, Fruitvale Station is a film that will give you something to think about upon leaving the theatre.