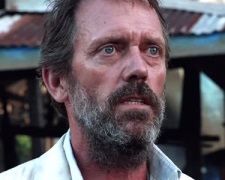 In the iconic Charles Dickens’ novel Great Expectations, a young orphan named Pip dreams of a better life. He doesn’t want to follow in the footsteps of his sister’s husband and become a poor blacksmith. He wants money. He wants privilege. He wants to mingle with the top end of society. Thanks to the help of a wealthy benefactor, Pip is granted his wish and his life changes forever.

New Zealand author Lloyd Jones has taken Dickens’ classic tale and woven into a more modern story. Mr Pip is set on Papua New Guinea’s Bougainville Island in the early 1990s. Those old enough will remember it being a time of political turmoil. Unhappy with their mineral resources being pillaged by foreign companies, the island sought independence from Papua New Guinea. What followed was a civil war that would take roughly 20,000 lives over a 10 year period.

Having completed his 8 series run on the popular television series House, actor Hugh Laurie stars as the mysterious Mr Watts – the sole Englishman in a small Bougainville community. All of his fellow countrymen fled once the war began but Mr Watts, having recently married a native Bougainville woman, took a risk and chose to stay.

In search of something to do, Mr Watts takes on the role of school teacher for the local kids. He has no experience… but as a lover of great literature, he tries to pass on the joy that he gets from reading a wonderful novel. His first choice is Great Expectations and within a matter of weeks, his classroom is filled not just with children but also with adults wanting to hear Mr Watts read the latest chapter.

A young girl named Matilda (played by newcomer Xzannjah) takes a particular interest in Mr Watts and the novel. She starts creating her own fantasies that mirror those of the leading characters in Great Expectations. They provide hope that perhaps she can one day escape war torn Bougainville and forge her own “better life” with her father in Australia.

Writer-director Andrew Adamson has already put together a diverse resume that includes animated features (the first two Shrek movies) and action blockbusters (the first two Narnia movies). This is a very different film for Adamson in that he’s working on a tiny budget and with a bunch of non-actors. Aside from Hugh Laurie, the cast is made up of Bougainville locals – many of whom lived through the civil war and wanted to help bring this story to the screen.

I found this film hard to embrace. Mr Watts is a strange character who seems to create problems for himself when he doesn’t need to. It’s also difficult to appreciate the plight of the Bougainville residents as the movie only provides a patchy overview of the civil war and its history. When the town is invaded by a gun-wielding militia, I struggled to grasp who they were and what they were fighting for. The film also points a critical finger at Australia for its involvement in the war (perhaps rightly so) but it’s another subplot that isn’t explored in enough detail.

I enjoyed the overlap of the Great Expectations story and how it starts to shape Matilda’s dreams. There are also some unexpected moments late in the film that will stir emotions. Unfortunately, these likeable qualities aren’t quite enough to overcome the script’s limitations.