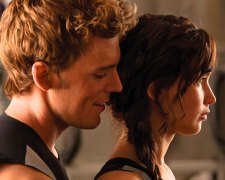 I would have done a few things differently but I did enjoy the first Hunger Games movie, released back in March 2012. So much so that it actually inspired me to read the book! The use of an exclamation mark is justified. As I spend so much time in cinemas and on the golf course, I usually only find the time/energy to read a couple of books each year (woe is me).

Having also read the second novel, I came at The Hunger Games: Catching Fire from a different angle. Instead of going into the theatre blind with no knowledge whatsoever, I had a heightened sense of anticipation. I knew what was going to happen (the second book was actually very good) but it was now a question of how it would translate onto the big screen with a widened cast.

To bring newbies up to speed, The Hunger Games series is set in a futuristic world dominated by inequality. Citizens in the Capitol have lavish clothes, extravagant meals and beautiful homes. Those in the neighbouring 12 districts work like slaves and live in poverty. If you think that’s bad… once a year, the Capitol chooses two teenagers from each district and has them fight to the death in a makeshift area. It’s televised for the Capitol residents who are allowed to place bets and “sponsor” contestants so as to influence the result.

In the first movie, two contestants from the same district managed to survive thanks to some cunning play – Katniss Everdeen (Lawrence) and Peeta Mellark (Hutcherson). Their success was celebrated within the poor districts and as you’d expect, this wasn’t well received by the Capitol’s tyrannical leader, President Snow (Sutherland).

To squash any chance of an uprising, Snow and new Head Gamemaker Plutarch Heavensbee (Hoffman) have come up with something special for this year’s 75th annual Hunger Games. The 24 contestants will not be teenagers. Rather, they will be former champions from recent years. Katniss and Peeta will again be forced to compete against “the best of the best” and, to borrow from the film’s catchphrase, the odds do not appear to be in their favour.

The film comes together nicely. As was the case with the first instalment, it’s the opening hour that works best. The story is fictional (obviously) but the key theme of human oppression leaves plenty to reflect upon. We’ve seen it again and again throughout our history and I can’t help but think about the recent Arab Spring. If you push people to the breaking point and create a situation where they have nothing to lose… they will fight back. The bottom line – this is a franchise that offers more than just action and romance. For that, I am grateful.

The 75th Hunger Games dominate the film’s second half. While you won’t be feeling as emotional as the characters in the games themselves (some fight sequences do feel manufactured), there are a few interesting twists that will keep you intrigued. Don’t expect everything to be revealed though. Much has been saved for the final two films which are slated for release in 2014 and 2015.

Jennifer Lawrence is a perfect fit for the leading role and she’s well supported by group of actors led by the likes of Donald Sutherland, Stanley Tucci and Woody Harrelson. They don’t get a lot of screen time but they all manage to make an impression. That said, it will probably help if you’ve seen the first movie as there isn’t much in the way of character history.

There’s a new director at the helm this time with Francis Lawrence filling the shoes of Gary Ross. I can’t see too many noticing. The film has retained the same look and feel. Events feel a little rushed at times but the strength of the story and its characters make this a series I’ve become a big fan of.