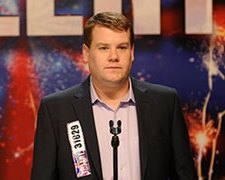 If you jump onto Youtube and type in the search term “Paul Potts first audition”, you’ll get a glimpse of what is an inspiring true story. Paul Potts, a mobile phone salesman from Wales, took to the stage in an effort to earn a spot on the 2007 series of Britain’s Got Talent. The judges looked ready to write him off as another dud contestant… but when Paul opened his mouth and sung the iconic opera aria “Nessun dorma”, he received a tear-filled standing ovation. He would go on to take the £100,000 prize and become the show’s first winner.

For whatever reason, director David Frankel (The Devil Wears Prada) and writer Justin Zackham (The Bucket List) have decided to take Paul’s story and adapt it for the big screen. It doesn’t work. They’ve taken a beautiful story, which can be already be viewed online (or perhaps purchased on DVD), and turned it into an over-scripted drama with some strange production choices.

First and foremost, star James Corden (The History Boys) doesn’t use his own voice when singing. It’s the voice of the real Paul Potts that is dubbed over the top. It’s obvious to the point of being distracting. It hurts the film’s credibility and will leave you asking the question – why didn’t the cast someone who could actually sing opera?

Things get even stranger when we reach the film’s climax and Paul’s first performance on Britain’s Got Talent. We see shots of actor James Corden standing on stage and performing the aria. However, when we see shots of the audience and the judges (including Simon Cowell), the actual footage from the 2007 show is used. It’s another puzzling decision that diverts attention from what should be the movie’s signature moment.

Everything in the lead up is formulaic and unadventurous. We see Paul’s father (Meaney) try to convince his son to give up on his silly opera school dreams. We see Paul mocked and beaten by a group of bullies who have targeted him since high school. We see him meet a girl (Rooper) who gives him the courage to take that “one chance”.

I’m not a huge fan of reality television and it’s a little concerning that we are now making films based on the results of such programs. You’d like to think that there are more interesting stories out there, stories that we haven’t heard before. I’m not dissing the achievements of Paul Potts but this is a formulaic exercise in “feel good” cinema that fails to recreate this inspirational tale.

You can read my interview with director David Frankel by clicking here.