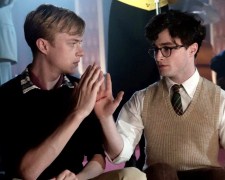 The year is 1943, the setting is New York City, and the central character is a shy, budding poet by the name of Allen Ginsberg (Radcliffe). A student at Columbia University, there’s a great scene where Ginsberg challenges his lecturer’s rigid devotion to rhythm and meter. While most students were happy to follow textbook methodologies, Ginsberg thought differently. He was inspired by the great 19th century poet Walt Whitman and was in search of his own unique voice.

Ginsberg was a talented writer. There’s no doubt about that. We get to hear some his beautiful prose during the film. That said, Ginsberg was also shy, naïve, inexperienced. He had few friends and few life experiences. He was in search of someone or something to serve as his inspiration.

That gap was soon filled by a dashing young gentleman by the name of Lucien Carr (DeHaan). A fellow student at Columbia, Carr was extroverted socialite who loved to drink and loved to party. In one of their early encounters, Carr explains his outgoing personality to Ginsberg by saying – “I love first times. I want my entire life to be composed of them. Life is only interesting when life is wide.”

The film’s first half is an intriguing character study. Ginsberg and Carr weren’t linked romantically but they shared a “closeness” that went beyond a straight forward friendship. It helped them discover who they were – both on and off the page. Daniel Radcliffe (Harry Potter) and star-the-making Dane DeHaan (Chronicle, Lawless) deliver superb performances that tap into their character’s respective insecurities.

Kill Your Darlings shifts direction in its second half and becomes more of a murder mystery following the death of a David Kammerer (Hall), a close friend of Carr. It’s the weaker section of the movie as events are rushed and it’s hard to keep up with the mindset of each character. Further, a few titbits of information are provided during the closing credits which I’d have preferred to see included by adding an extra 10-20 minutes to the running time.

The film marks the directorial debut for 40-year-old John Krokidas. I’m looking forward to his future projects as Kill Your Darlings has a distinctive visual presence thanks to some beautiful cinematography and unorthodox editing. He’s done a terrific job recapturing New York in the 1940s without having to rely on special effects. The soundtrack is also a big help in that regard.