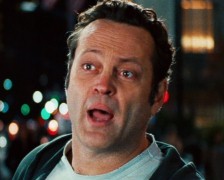 I’m kind of glad this is not based on actual events. Delivery Man is the tale of David Wozniak – a man who has just discovered that he is the father to 533 children. How is this possible? Well, in the early 1990s, David made 691 visits to his local sperm bank. He wasn’t doing it for the good of mankind. David needed cash.

You’d think there’d be some kind of controls in place but it turns out David’s sperm was of great quality and was used to help a record number of women conceive. Ordinarily, David would be none the wiser but a class action lawsuit has been launched by 142 of his children who want to know the identity of their father. They only know him by his code name, Starbuck.

Vince Vaughn, in a typical Vince Vaughn role, overplays his character’s emotions for comedic effect. At the start, he’s freaking out and using his lawyer / best friend (Pratt) to help keep his name concealed. This becomes trickier when the case becomes a worldwide news story. It’s even joked about on late night talk shows.

Somewhat predicably, David mellows and decides to seek out some of the kids - most of who are in the later stages of their teen years. They include a star basketball player, a struggling actor, a chronic drug user and a strange clingy homebody. David doesn’t reveal that he’s their father… but the time he spends with them has him re-evaluating his own relationships and plans for the future.

There are some touching elements to this story highlighted by a moment where David realises one of his children is a disabled young man who has been abandoned and institutionalised. The film is trying a little too hard though with some of its other “warm and fuzzy” moments. I realise this is a far-fetched comedy but his interaction with some of the kids feels too forced, too scripted.

I’d also argue that not enough time is spent exploring his relationship with his long-term girlfriend (who feels very much pushed into the background). The comedy tends to be hit and miss but the best material seems to be shared between David and his best friend, Brett, as they debate the merits of his bizarre plans and ideas.

A remake of a 2011 Canadian film from the same director (entitled Starbuck), Delivery Man can’t quite deliver on its interesting premise.