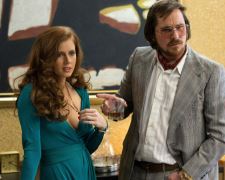 It was named the best film of the year by the prestigious New York Film Critics Circle. It was included in the American Film Institute’s annual top 10 list. It led the nominations for the Golden Globe Awards with 7 nods including best picture drama. It was nominated for best ensemble at the always important Screen Actors Guild Awards. It currently has 97% approval on Rotten Tomatoes based on the opinion of more than 60 critics. American Hustle must be an amazing film, right?

Well, actually, no. Every award season, there are always one or two contenders that I don’t connect with (for whatever reason). Recent examples include The Tree Of Life, The Kids Are All Right and The Curious Case Of Benjamin Button. I should also name Silver Linings Playbook but don’t want to sound like I’m beating up on director David O. Russell too harshly.

American Hustle begins with a lengthy introduction. We are told that the story is set in 1978 and that “some of this actually happened”. Irving Rosenfeld (Bale) and Sydney Prosser (Adams) are two con artists that have established a successful brokering business in New York City. They promise to help business owners desperate for short term loan funding… in return for a non-negotiable, non-refundable fee paid up front. Do they end up talking to financial institutions and getting the loans? Nope! They simply apologise and tell their clients that they were unsuccessful.

It’s a smooth operation that comes unstuck when they are busted by an overzealous FBI agent named Richie DiMaso (Cooper). He promises not to press charges if they’ll agree to help him snare some “bigger fish”. DiMaso wants to use their con artist skills to entrap high profile politicians and mobsters. He sees it as his best chance of earning a quick promotion within the FBI.

Their key target is Carmine Polito (Renner) – the popular mayor of Camden, New Jersey who is looking for investors to help rejuvenate the casinos of Atlantic City. Rosenfeld and Prosser come up with the idea of creating a fake Arab sheik with money to splash around. If they can get footage of Polito and other officials accepting bribes in return for development approvals, they’ll have fulfilled their obligations to the FBI and they’ll have stayed out of jail. Ah, but it’s not going to be that easy.

The film’s strongest attributes are the performances from the two female leads – Amy Adams (The Fighter) as the seductive con artist who loves speaking in an English accent, and Jennifer Lawrence (Silver Linings Playbook) as a jilted wife who becomes a part of everyone’s plans without actually realising it. My thumbs are also up for the set decorators, costume designers and make-up artists who have had fun recreating the late 1970s. Christian Bale and his not-so-convincing toupee had me smiling during the film’s opening scene.

There are a few other genuine laughs (such as Louis CK’s yarn about his brother) but they’re overshadowed by the messy, overly-convoluted screenplay. Despite the heavy use of narration, I still struggled to keep up with each character’s motivations and mindset. It’s designed as a “who’s playing who” movie but there were parts that it felt more like a “what the hell is going on” movie.

The story is also hard to buy into given the erratic nature of its characters. There are moments where they show great knowledge and insight. There are other moments where they act in a rash, silly, illogical manner. It left me asking the question – how could people so dumb pull this off? Was this a sequel to Pain & Gain? I also have concerns about the overly incompetent FBI.

American Hustle isn’t a bad film… but it’s certainly an overrated one.