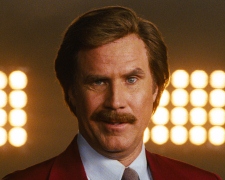 Ron Burgundy (Ferrell) has only one dream in life – “to have salon-quality hair and read the news”. Unfortunately, the second film begins with a step in the wrong direction. He is sacked by the station manager (Harrison Ford) who describes him as “the worst anchorman I have ever seen.” It’s fair description.

Forced to take a gig as the dolphin show host at SeaWorld (he’s not very good at that either),  Ron is given a fresh lease on life when approached to join the new Global News Network (GNN). Keeping in mind that this film is set in the 1970s, the GNN is trying to become the first 24-hour news network in the United States. They’ve personally selected Ron and his team (don’t ask me why) to host the graveyard shift from 2am to 5am.

So who watches news at that hour? Who is even awake? Desperate to prove himself in the ratings, Ron decides to roll the dice and transform his daily 3 hour news segment into something very different. In his own words – “Why do we have to tell people what they need to hear? Why can’t we just tell them what they want to hear?” His biased, crazy, pro-America show becomes an overnight sensation. Ron Burgundy is back.

I say this too often but this is another film with potential that underachieves. When you think about the way that the “news” has evolved over the past few decades, there’s room for a lot of great jokes. One of the best scenes sees Ron create the first televised car chase. While his ex-wife is interviewing Yasser Arafat on another network, Ron is luring audiences with the helicopter-covered chase and his wildly speculative commentary.

Regrettably, not enough time is spent poking fun at way in which we disguise entertainment as serious news. Instead, the film strives for laughs but offering moments that are both random and bizarre. Most of them don’t work. Steve Carell fakes his death and then turns up unknowingly at his own funeral. David Koechner opens a restaurant that serves bats instead of chicken. Kristen Wiig joins the cast as a socially inept receptionist and her nonsensical interaction with Steve Carell gets tired quickly.

It’s been 9 years since the original Anchorman and while it didn’t reel in as much money as some of Will Ferrell’s other low-brow comedies (such as Talladega Nights, Blades Of Glory, Step Brothers), the film has since developed a cult-like following. There were no plans for a sequel. This film only came about because of an increasing demand from the public.

I’m sure many will enjoy Anchorman 2 for what it is. I admit to having a few laughs and yes, I did smile during the finale which involves many, many cameos. It’s a weak story though. More needed to be made of Ron Burgundy’s conflict with the GNN owner (played by Australian Josh Lawson) but again, this is pushed aside for lengthy skits revolving around Ron’s casual racism (oh, and a peculiar subplot involving blindness).

While I wasn’t a huge fan of the 2004 original, I’m confident that it’ll be judged more highly than this disappointing sequel.

You can read my interview with director Adam McKay by clicking here.