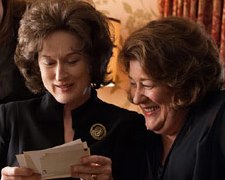 “Atticus says you can choose your friends but you sho' can't choose your family, an' they're still kin to you no matter whether you acknowledge 'em or not, and it makes you look right silly when you don't.” These were the words of youngster Jeremy Atticus Finch in Harper Lee’s iconic novel To Kill A Mockingbird. It’s also a quote that best sums up the theme of August: Osage County.

Following the death of their father (Shepard), three sisters have returned to their childhood home in Oklahoma for the funeral. It doesn’t take long for the arguments to begin. The person picking most of the fights is their mother, Violet (Streep). I can best describe her as a chain-smoking, pill-addicted, attention-seeking matriarch who loves to complain.

Violet has mastered the art of “pushing someone’s button”. She takes great pleasure from it. When she gets a moment alone with her middle daughter, Ivy (Nicholson), she criticises her hair, her lack of makeup and then says “you look like a lesbian”. When invited to the Florida wedding of her youngest child, Karen (Lewis), her response is short and sweet – “well I don’t really see that happening, do you?”

Based on the Tony Award winning play by Tracy Letts, this film adaptation is to be celebrated for its great performances. You’re unlikely to forget Streep’s vindictive persona and sharp insults any time soon. There’s room for a little sympathy towards her character… but not a lot. Chris Cooper is also terrific as Violet’s brother-in-law. He’s a quiet, unassuming man but he’ll put his foot forward when the time is right. Other cast members I don’t want to overlook are Julia Roberts (who has been picking up some award season attention) and the underrated Margo Martindale (Million Dollar Baby, Dead Man Walking).

The film doesn’t offer a lot in terms of narrative. It’s set over a few hot days in August (hence the title) and is best described as an observational character study with a lot of dialogue. Some of the conversations are immensely entertaining (such as the family meal around the dinner table) but others are a touch tiring, repetitive. They’re not as real or absorbing as what you might see in a Mike Leigh film (the master of observational drama).

I recently saw a television ad for August: Osage County (see here) which had some light, fluffy music and then asked us “to celebrate the holidays” in “the year’s most outrageous comedy”. That’s false advertising. This is a miserable fucking movie… and that’s meant to be a compliment. It’s not Snowtown-dark but it’s still a bleak look at a troubled family who can’t escape each other. Julia Roberts, playing the eldest daughter, sums up their lives best – “Thank God we can’t tell the future. We’d never get out of bed.”