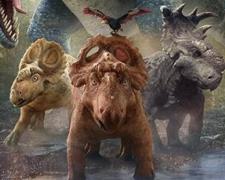 Set 70 million years ago, Walking With Dinosaurs is a live-action family film that centres on a young dinosaur named Patchi who is trying to find his place in the world. He will encounter many other dinosaurs in his travels, some who will be his friends and others who are looking to eat him.

It’s clear this film is targeted at a younger audience. It’s not designed to appeal to the masses like a Jurassic Park. The story is kept simple (it runs for just 87 minutes) and there are even some small educational elements. The film pauses every so often to give us a few titbits of information on the scary dinosaurs that we see on screen. This includes their name, their origin and their diet.

Some of the character transformations are rushed (such as that of Patchi’s older brother) and I don't quite think there’s enough here to keep youngsters entertained. The dinosaurs are cool though.  Directors Barry Cook (Mulan) and Neil Nightingale had an $80m budget to work with and so they do look very realistic. An Australian-based company, Animal Logic, was behind the bulk of the special effects. They are well established within the industry having worked on such films as The Matrix trilogy and Happy Feet.

It’s not a huge cast but two voices you will probably recognise are Justin Long (Dodgeball) and John Leguizamo (the voice of Sid in the Ice Age series). You can see that they’re trying to make their respective character as fun and exciting as possible. Not all of the dinosaurs talk though. Most of them get their message across through a fierce roar.

I don’t think the expectations are too high for Walking With Dinosaurs (20th Century Fox didn’t even preview it to critics in Brisbane) but if you’ve seen Frozen and you’re looking for a way to occupy your young kids for a few hours over the school holidays, this could be a viable option.