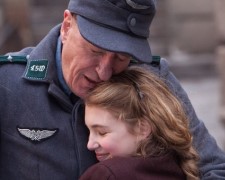 We’ve seen a few films in recent years that have covered World War II from the perspective of children. Examples which come to mind are The Boy In Striped Pyjamas (2008), Sarah’s Key (2010) and Lore (2012). The newest addition to that quickly growing group is The Book Thief – based on the novel by Australian Markus Zusak and brought to the screen by Emmy Award winning director Brian Percival (Downtown Abbey).

The story begins in 1938 and centres on a young girl named Liesel (Nélisse) who has been placed in the care of two foster parents (Rush and Watson) living in a small German town. Coupled with the recent death of her younger brother due to illness, it’s a situation the shy, quiet Liesel is struggling to grapple. Why was she abandoned by her mother? Will she ever see her again?

The remainder of the film spans the breadth of World War II as seen through Liesel’s eyes. Some of her experiences would be familiar to many of us. She develops a love for literature after being taught how to read by her new father. She becomes best friends with a sporty, energetic boy (Liersch) who lives down the street. He’s always chasing her for a first kiss!

Some of her other experiences are darker, more life threatening. Her foster parents agree to hide a young Jewish man (Schnetzer) is their small basement so that he can evade capture by the Nazi soldiers. Liesel realises the importance of keeping his presence a secret. If discovered, her world will again be upended and her new family imprisoned.

The Book Thief isn’t offering any new insight into the events of World War II. We know of the atrocities that took place and we’ve heard similar stories of heroisms. The film still packs a strong emotional punch though thanks to the likeable nature of its leading characters. You want them to find comfort, happiness. With a sweet smile and a curious disposition, 13-year-old Canadian actress Sophie Nélisse (Monsieur Lazhar) is a wonderful fit in the leading role. She’ll be a name to watch in the near future.

The film is also to be enjoyed for two elements that hear but don’t see. Firstly, staying true to Zusask’s novel, we hear a few poignant words from Death as the story’s narrator. It’s a curious choice that provides a dash of intrigue. Secondly, 5-time Academy Award winning composer John Williams adds a key layer with a sweet yet hauntingly reflective score. It’s the first time that Williams has written the music for a non-Steven Spielberg directed film since 2005’s Memoirs Of A Geisha.

Screenwriter Michael Petroni (The Chronicles of Narnia: The Voyage of the Dawn Treader) faced a tough battle in condensing the 550 page novel into a two hour feature film. Sufficient time is devoted to character development but there are some key plot developments in the film’s second half that feel too rushed. Sticklers for realism might also question why Liesel always looks so good (despite living in near-poverty) and why the young actors speak so insightfully (despite their age).

It hasn’t received much attention over the current award season but The Book Thief is still a film that will admired by many.