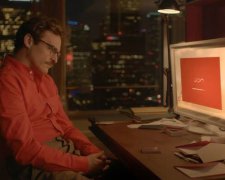 Theodore Twombly (Phoenix) is a curious individual. It’s hard to work out if he’s happy with his progression in life. He’s forged a surprisingly successful career as a “professional letter writer” for a small firm. You pay him a fee and he’ll come up with a heartfelt love letter, birthday greeting or anniversary note. He’s got a knack with words (at least when putting them on paper) and his customers keep providing rapturous feedback.

His confidence at work hasn’t translated into his personal life. Theodore comes across as an insecure guy who struggles to hold a conversation. There’s a moment where he goes on a blind date with a friend of a friend (Wilde) but it doesn’t end well. Her final words to him are not pleasant. Theodore also resists change. His wife (Mara) recently left him but he blindly hopes they’ll get back together. He’s certainly in no rush to sign the divorce papers, despite her insistence.

There is a place where Theodore is comfortable – alone at home. He has a spacious apartment with nice views (not sure how he can afford it) and he’s happy enough to sit on the couch and play video games. If in need of company, he walks down the hall and knocks on the door of his long-time friend, Amy (Adams). They vent, they gossip, they laugh. Occasionally, they open up.

Don’t feel sorry for Theodore though. He’s about to meet Samantha (Johansson) – the woman of his dreams. She’s smart, funny and cheeky. She has a sexy voice and an infectious enthusiasm for life. She laughs at his jokes. She enjoys spending time with him. They soon become inseparable.

Anyone already familiar with the film will know the catch – Samantha isn’t a real person. She’s an operating system (referred to the film as an OS). Her is set in the not-to-distant future where this type of thing is starting to take off. These OSs are self-aware and have an ability to learn, an ability to interact. It was inevitable that humans would form an attachment and Theodore isn’t the only guy to have fallen in love.

He has only three other feature credits to his name but Spike Jonze has already defined himself as a director who thinks far outside the square. He worked with writer Charlie Kaufman to create two wonderfully original comedies – Being John Malkovich (1999) and Adaptation (2002). He then followed with Where The Wild Things Are – a heartfelt family adventure based on a novel containing just 338 words.

Her is striving to be an unorthodox romantic comedy. It’s a formulaic genre and so I like the idea of having a guy fall in love with someone who doesn’t actually exist. It poses specific functional questions such as “how do they have sex?” That answer is provided and you’ll enjoy the laugh. There are also broader philosophical questions about the appropriateness and healthiness of a relationship with a computer operating system. You’ll have to do the thinking and come up with these answers on your own.

The amount of pleasure you take from Her is likely to correlate with your willingness to suspend your sense of disbelief. It’s like watching a time travel movie. We know it’s not possible (yet) but it doesn’t mean that we still can’t enjoy the story. The fact that the film has been showered with praise during the current awards season, including being named best picture by the Los Angeles Film Critics Association, suggests many have bought into the concept of a computer with a romantic mind of its own.

For me, it was battle. The film takes a narrow focus and devotes itself almost entirely to the relationship of two characters that aren’t all that interesting. I grew tired of Theodore’s quirky, overanxious personality. I’d have preferred to see the film provide a wider view of this cool-looking futuristic world. It needed to analyse the public’s acceptance of human-OS relationships and question Samantha’s sincerity given she is the creation of a controlling, profit-driven corporation. For such a complex issue, Her feels too simplistic.