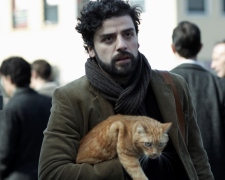 A lot changes in Hollywood – marriages, friendships, faces. One thing that has endured is the filmmaking partnership of Ethan Coen and Joel Coen. Sure, they’re brothers… but these two guys have always worked together. They’ve compiled an incredible body of work that includes Academy Award winners (Fargo, No Country For Old Men) and cult classics to be watched again and again (Barton Fink, The Big Lebowski).

Inside Llewyn Davis is their latest collaboration and centres on a struggling folk singer (Isaac) living in New York, 1961. Struggling is probably an understatement. Llewyn turns up at a studio recording session and when asked to fill out his details for the payroll clerk, he leaves the address field blank. It’s not because he’s keeping a low profile. It’s because he’s homeless. With barely a cent to his name, he’s been turning up at the apartment of some friends, often uninvited, and asking to crash on their couch.

Do we feel sorry for Llewyn? Well, not really, no. He’s a good singer, no doubt about that. In the film’s opening scene, we see him perform a heartfelt song in front of a small audience at a dingy looking club. Llewyn’s problem is himself. He’s his own worst enemy. He doesn’t cope well with adversity or criticism. Even when someone offers a helping hand, he finds a way of screwing it up.

This is not a commercial film. I have friends who I know would be bored stupid. I like the quote from New York Times critic A.O. Scott who describes the film as “a wobbly, circular journey to nowhere in particular and back.” We see Llewyn interact with an assortment of odd characters, typical of a Coen brothers film, and that’s about it. There’s no shock twist or no huge character transformation.

I was somewhat bewildered on leaving the cinema but Inside Llewyn Davis is a film that has stuck with me. Perhaps that’s because of the wonderful soundtrack and sleepy New York setting. Perhaps it’s because of the terrific central performance from Oscar Isaac. Perhaps it’s because I couldn’t quite get my head around it. I’ve read a few internet forums that suggest several underlying messages – many involving a cat that Llewyn is forced to carry around for a while. A second viewing will be required.