Review: The Wolf Of Wall Street 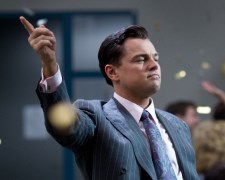 The first corporations in the UK and the US were subject to very strict rules and regulations so as to prevent them from becoming too powerful. They could only engage in specific activities allowed for by the government (which were often for a public good). They could not own stock in other corporations. Their members could be personally liable if losses were incurred. It wasn’t until the late 19th Century that the first states in America started relaxing laws so as to stimulate business activity.

Does it matter that he knows nothing about the corporations that he’s recommending to his clients? Nope. The stockbroking game is not about picking winners and losers. It’s not about increasing the wealth of investors. Belfort is told the only thing he has to worry about is commissions. You see, brokers get their fee up front. They don’t care what happens after you’ve invested. Somehow, I don’t think this was envisioned by those who first came up with the idea of a “corporation”.

It’s hard to believe this is a true story. I’m sure a few elements have been embellished (the screenplay is based on Belfort’s autobiography) but the key facts have been proven. Within the space of a few years, Belfort created one of the world’s largest stockbroking companies and was worth roughly $200 million. A Forbes magazine article exposed some of his firm’s dodgy practices… but this only made Belfort more popular! Everyone wanted in. Everyone wanted to be rich. It was like pigs at a trough.

Brought to the screen by iconic director Martin Scorsese (Goodfellas, The Departed), The Wolf Of Wall Street has generated controversy. Detractors believe that the film glorifies Belfort’s actions given its many comedic scenes and its lack of a moralistic conclusion. That was certainly not Scorsese’s intention. He didn’t want audiences to leave the cinema feeling better and thinking that the problem has been solved. He “wanted them to feel like they’d been slapped into recognising that this behaviour has been encouraged.” The film’s final scene is haunting in that regard.

My only qualm with the film is its length. At 180 minutes, it’s the longest of this season’s award contenders. The first hour is fast, tight and you can see the great work done my Scorsese’s long-time editor Thelma Schoonmaker to keep the story moving. Things start to slow from thereon and a splash of repetition creeps in. Perhaps this was also part of Scorsese’s plan? Maybe he wanted to push filmgoers to the point of exhaustion.

There’s an extra reason for Australian audiences to see the movie and that’s to admire 23-year-old Margot Robbie who deservedly gets plenty of screen time as Belfort’s second wife. Robbie graduated from Somerset College on the Gold Coast in 2007, landed a role in Neighbours, picked up a smart part in Richard Curtis’ About Time, and now looks set for very big things.

Nominated for 5 Academy Awards including best picture, The Wolf Of Wall Street is not so much a film… but more of an examination paper. When you leave the room after three hours, you’ll know if you’ve passed.