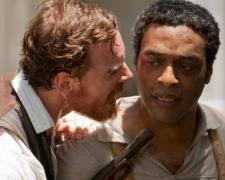 There’s a great non-fiction work from Lebanese American writer Nassim Nicholas Taleb entitled The Black Swan that looks at the nature of random events and the way we analyse them. A book that influenced him heavily as a child was a published diary from a journalist working in Berlin during the early stages of World War II.

Taleb wrote about the concept of “retrospective distortion”. Our memories are limited and so our perception of events can change over time. There’s also the benefit of hindsight. What drew Taleb to this diary was the fact that it was describing events as they took place. The writer didn’t know what was going to happen next. It revealed that many in France thought Hitler was a fleeting phenomenon and that any conflict would be quickly resolved.

I was thinking about Taleb’s writings while watching 12 Years A Slave – the third feature film from British director Steve McQueen (Hunger, Shame). The story is based on the novel of the same name that was authored by an African American slave back in 1853. It provides an important perspective because (1) it was written well before slavery was abolished by the U.S. Government in 1865, and (2) only a small number of slaves were able to read and write.

McQueen had been looking to make a movie about slavery in the 19th Century (there aren’t a lot of them when compared to say WWII movies) and it was his wife who stumbled across a copy of Solomon Northup’s 12 Years A Slave. He has compared it to The Diary Of Anne Frank and can’t believe that it’s not widely read in schools across the United States. That fact may change as this powerful cinematic adaptation is likely to build interest in the subject matter.

The film begins in 1841 and introduces us to Solomon Northup (Ejiofor) – a well-to-do African-American living in New York with his wife and two children. Approached to work as violinist for a travelling circus troop, Solomon is drugged and kidnapped by two men looking for some “fresh niggers”. They steal his identification papers and ship him to New Orleans to work as a slave on a cotton plantation.

What follows is a decade long journey of survival. He was whipped, beaten, worked to the bone. He saw fellow slaves tortured, raped and killed. The movie is tough to watch at times (there were a few walkouts at my preview screening) but you’ll know exactly what Solomon went through and you’ll feel the uncontrollable sense of hopelessness that engulfed him. Twelve years is a long, long time to be held against your own free will.

Similar to McQueen’s previous two films, dialogue is kept to a minimum. It’s as if he doesn’t want the characters to speak unless words are absolutely necessary. It’s an approach that suits this subject matter as it gives you time to observe and reflect as opposed to just listening to constructed dialogue. The subtle music of Hans Zimmer (Inception) also helps in this regard.

The film recently received 9 Academy Award nominations – 3 of which were in the acting categories for first-time nominees. Chiwetel Ejiofor (Children Of Men, Kinky Boots) and newcomer Lupita Nyong’o were recognised for their passionate performances as African American slaves. Michael Fassbender (Shame, Prometheus) received a nod for his portrayal as a ruthless, vengeful plantation owner. I’d argue he’s the film’s most interesting character.

12 Years A Slave has been the Oscar front runner since it won the prestigious People’s Choice Award at the Toronto Film Festival back in September. It’s a heavy, depressing film but it’s also one that’s hard to discredit.

You can read my chat with director Steve McQueen by clicking here.