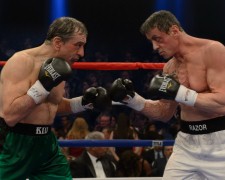 We’ve witnessed some great boxing rivalries over the past century – Muhammad Ali versus Joe Frazier, Tony Zane versus Rocky Graziano, Arturo Gatti versus Micky Ward. The screenwriters for Grudge Match have come up with a new pairing to “rival” them all. In the red corner we have Henry “Razor” Sharp played by Sylvester Stallone. In the blue corner we have Billy “The Kid” McDonnen played by Robert DeNiro.

Three decades ago, these guys were at the top of the sport. They fought in front of two huge crowds and the honours were shared – The Kid won the first bout over 15 rounds but Razor took the title back in a shorter second fight. Their adoring fans for ready for a “winner takes it all” third fight but Razor stunned almost everyone by announcing his retirement. That was that. Their record would forever remain at 1-all.

Well, until now. Razor has just lost his job at a shipyard and is in desperate need of cash (he lost all his boxing winnings). The Kid has no financials concerns but he’s always wanted to prove himself as the better boxer. When approached by a self-promoting promoter (Hart) looking to make a quick buck, the pair agree to a one-off rematch. They’ve got 12 weeks to get into shape for a rematch that’s been 30 years in the making.

As is often the case with a sporting flick, the focus can’t solely be on the contest itself. Grudge Match contains a few subplots to help us get to know the characters and their plight. Razor is reunited a former flame (Basinger) and his foul-mouthed trainer (Arkin) who offers some fair advice – “if you go down, it’s safe to say that you’ve fallen and can’t get up.” The Kid discovers that he has not just a son (Bernthal) but also a grandson.

The story here is fairly loose. For starters, it’s hard to believe that two renowned boxers would have so much trouble pulling in a crowd. There are a few scenes in the film where they go out and perform cheap, gimmicky stunts to help publicise the event. I’m sure if Mike Tyson and Evander Holyfield announced a rematch today, there’d be enough interest (as well as a few laughs).

I probably shouldn’t get too hung up on plot specifics since this film is clearly designed as a comedy as opposed to a drama. A few jokes will put a smile on your face but there’s not enough to warrant a “must see” recommendation. I’d also argue that Alan Arkin’s political incorrectness and Kevin Hart’s hyperactivity personality are overdone.

The film’s big fight finale doesn’t quite generate the excitement that you might expect (it’s formulaic at best) but make sure you do stay through the early part of the closing credits. There’s a surprising sequence that provides the film’s most memorable moment. For a boxing fan, it’s almost worth the price of admission.