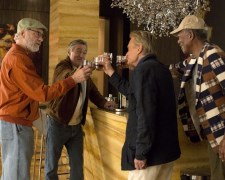 They’ve been best friends for 60 years but time is finally starting our four protagonists. Sam (Kline) has enrolled in a water aerobics class to try to get back into shape. Archie (Freeman) is recovering from a mild stroke and is dealing with his overprotective family. Paddy (DeNiro) has become a depressed couch potato following the death of his wife. Billy (Douglas) is worried about dying alone and has decided to take the plunge and marry someone less than half his age.

What better way of getting over their problems… than spending a wild weekend in Las Vegas! They can dance, play blackjack, drink martinis, judge swimsuit competitions, get laid, and generally have a good time. It’s designed to be an impromptu bachelor party for Billy before he finally ties the knot.

These are shallow characters. They’re loveable/sleazy (take your pick) and they all have some kind of magic epiphany over the course of the weekend that has them re-evaluating their lives. It’s a stretch. We never really get to know them. There are problems with the ending too. Writer Dan Fogelman (Crazy Stupid Love, The Trip) has created such a convoluted scenario that it’s really hard to come up with a plausible conclusion where everyone is “smelling like roses”.

That’s not to say that the film isn’t entertaining. Robert DeNiro, Michael Douglas, Morgan Freeman and Kevin Kline – all Academy Award winning actors – share the jokes around and have a good sense of comedic timing. They generally poke fun at themselves (describing the weekend as the “first bachelor party covered by Medicare”) but they also find time to mock those a little younger.

It's far from perfect but there's a layer of sentimentality that makes Last Vegas easier to digest. These guys reflect back on their lives and the enduring power of friendship. There are no Earth-shattering revelations but it’ll still win over the majority of cinema-goers. That’s evidenced from the film’s box-office take thus far – more than $120m internationally on a budget of just $28m (me thinks our leading men didn’t get paid huge dollars).