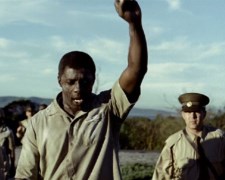 The most common approach with a biopic is to focus on a small part of the subject’s life and cover it in sufficient detail. Lincoln covered the President’s attempts to abolish slavery in 1865. Capote recounted the events that led to the famed novel In Cold Blood in the early 1960s. The King’s Speech looked at how King George VI overcame his stutter on ascending the British throne in 1936.

Director Justin Chadwick (The Other Boleyn Girl) and Oscar nominated screenwriter William Nicholson (Shadowlands, Gladiator) have gone for something far broader with Mandela: Long Walk To Freedom. They’ve taken Nelson Mandela’s autobiography (a rather lengthy 630 pages) and tried to condense more than 50 years of his life (1942 to 1994) into just over two hours.

It works… kind of. If you were new to the Nelson Mandela story and were looking for a neat summary of his upbringing, his struggles and his achievements, you’ll find it here. Idris Elba (Pacific Rim, Thor), in a rare leading role for him, does a good job recreating Mandela’s speech and mannerisms. Naomie Harris (Skyfall) also makes her presence felt by stepping into the shoes of Winnie Mandela.

Unfortunately, the film can’t quite overcome the inevitable problems with trying to tell a long story in a short space of time. It feels like we’re rushing between events and there’s never enough time to “take stock” and absorb some of the key themes. If you were to compare it to last week’s 12 Years A Slave – a story also about rights and freedom – it’s easier to see where this film is lacking. The emotional impact isn’t as strong. Some of the dialogue is a bit cheesy too.

South African born producer Anant Singh became friends with Mandela not long after he was released from prison in 1990 and was granted to rights to the autobiography after it was first published in 1995. You’d think that studios would jump at the chance to bring this tale to the big screen but it’s taken almost two decades to get where we are today. Authenticity was of particular importance to Singh and so actual locations were used wherever possible. These included scenes in the courtroom at the Palace of Justice and also at the prison on Robben Island.

It’s been a busy awards season and Mandela: Long Walk To Freedom hasn’t quite generated the attention that its financiers would have hoped for. The film’s only Academy Award nomination is for best song – a piece entitled “Ordinary Love” which was written by U2 and appears at the start of the closing credits. It’ll face strong competition from Frozen’s “Let It Go” on Oscar night.